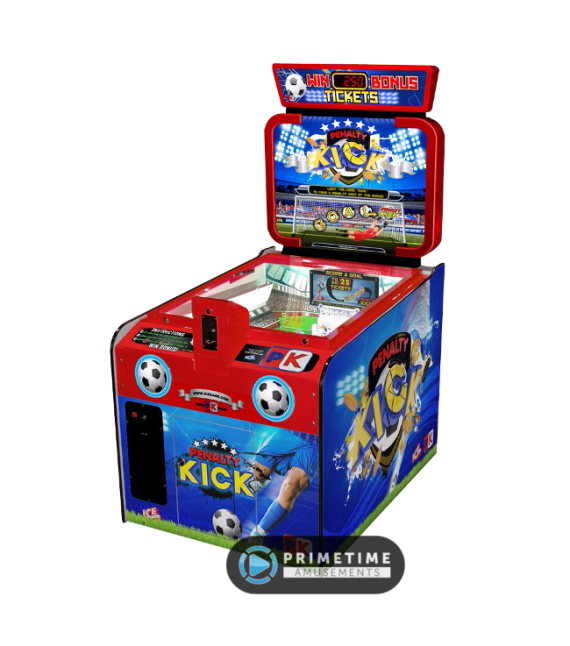 Penalty Kick by ICE is now scoring in amusement arcades across the world!

This soccer-themed quick coin roll down game is easy to play but tough to walk away from. It captures the emotion and excitement found during the penalty kick phase of a soccer match. The game also features a highly engaging in-game bonus feature that rewards players for multiple plays. Different than most quick coin games that places spinning circular target at the back of the game, Penalty Kick places the multiple target wheel laying flat in the center of the soccer field. Multiple stand-up targets are located on this wheel while small arrow targets work as a ‘bridge’ to get the coin to the goalie at the opposite end of the game. Players must score 4 G-O-A-L’s and then have a shot at the Penalty Kick Bonus! Enjoy a small foot print with BIG earnings for your arcade redemption center.

– Score 4 G-O-A-L’s then take on the Penalty Kick bonus for a big ticket win!

– ICE’s  is no longer in production. Please call us about availability. All used models pass through PrimeTime Amusement’s “Certified Pre-Owned” program, which guarantees that the game will be completely refurbished and ready to operate upon arrival. Also ask about our game rentals!

Check out the Penalty Kick as played at the IAAPA 2012 trade show: