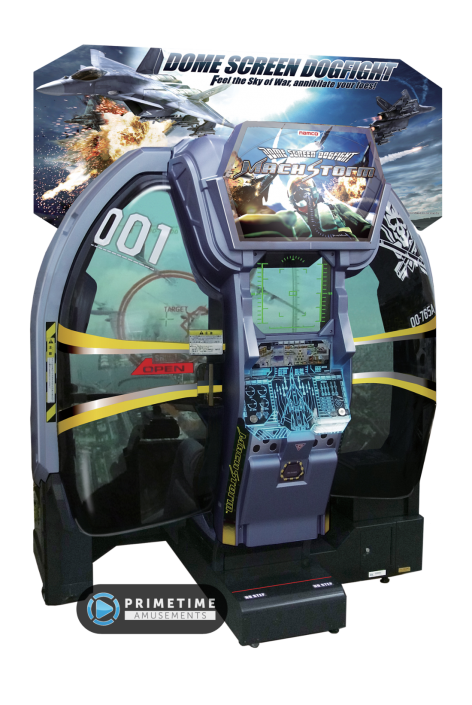 Note: This game has been discontinued

Kick the tires and light the fires as you blaze into the sky with Bandai Namco’s Mach Storm!

Mach Storm is an air combat/dogfighting simulator that offers the kind of unique high-tech experience that you will only find at the arcade. Using the specially designed “pod” cabinet, players sit inside of a cockpit style with a seamless dome screen projection display around them. This HD 180° degree view distinguishes the game from most other titles on the market, providing for a Virtual Reality style format without requiring the user to wear anything. You’ll truly feel like you are diving head first into the intense action!

This effect is enhanced further with the force feedback joystick, surround sound + subwoofer under the seat and wind (via the built-in fan), creating a “4D” style gaming platform that will dominate any arcade floor. The game also uses a camera to take a picture of the player for avatar and high score use.

Players can select from 5 different combat missions,  all set in real cities around the world: Miami (Easy), Paris(Normal), Dubai(Normal), Washington D.C.(Hard), and Tokyo(Hard). Perform well in the selected city and win an extra mission!

– Exclusive to arcades – based on Ace Combat: Assault Horizon that was released to consoles but heavily modified for arcade play

– Sega’s Mach Storm is no longer produced, having been released in 2013. Please call us about availability. All used models pass through PrimeTime Amusement’s “Certified Pre-Owned” program, which guarantees that the game will be completely refurbished and ready to operate upon arrival.

Check out Mach Storm in action from IAAPA 2013: