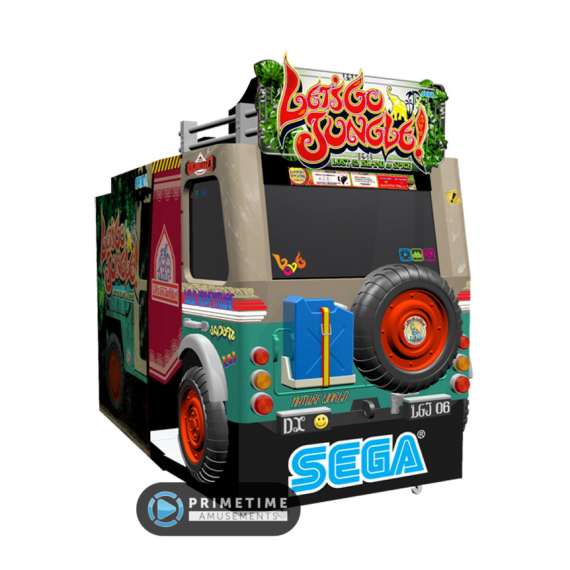 Let’s Go Jungle! is the game that launched a renaissance for light-gun shooting games, placing a strong emphasis on co-operative gameplay inside of a ‘theater’ enclosed sit-down cabinet. It’s a pattern that almost every modern light-gun shooter now follows!

In Let’s Go Jungle!, you play as a young couple who have taken a cheap holiday for a little excitement on an uninhabited island, untouched by man and technology! Unfortunately, their tour turns to terror when an army of giant life forms unleash a massive attack. You need to use your wits and unlimited ammo to get off the island in one piece – can you survive?

Players work in pairs to overcome high-tension, action-packed obstacles and swarms of enemies. This includes a variety of insects, arachnids and other giant creepy creatures. At certain points in the game, the player must perform special tasks such as moving the gun in a direction, tapping buttons quickly, or tapping the buttons at the right time to surpass the obstacle without taking damage. Players are scored on their effectiveness in working together at the end of each round.

REFURBISHED STOCK: 3/24/22! – A Let’s Go Jungle unit is available from a PrimeTime operated location in Florida. Each will go through our Certified Pre-Owned refurbishing program before shipping to you. Please call for pricing and lead time.

– Released in three designs, an upright model and the Theater Environmental Deluxe model molded to look like a jeep. A theme park edition called Let’s Go Jungle Special was also made in extremely limited quantities.

– Deluxe model features a 50″ projection screen. Ask about upgrading to a modern LCD!

– Surround sound system further immerses the players in the action

– Sega’s Let’s Go Jungle is no longer produced, having been released in 2007. Please call us about availability. All used models pass through PrimeTime Amusement’s “Certified Pre-Owned” program, which guarantees that the game will be completely refurbished and ready to operate upon arrival.