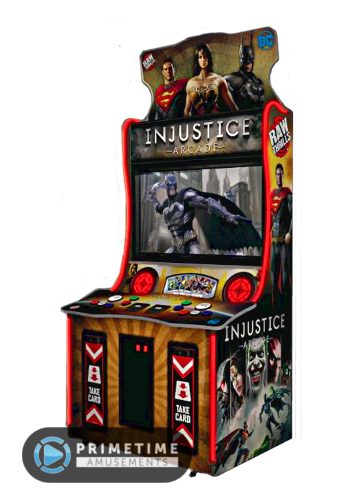 The heroes and the villains of the DC Comic universe come head-to-head in this new card vending arcade experience by NetherRealm Studios and Raw Thrills – Injustice Arcade!

Based upon the mobile version of Injustice: Gods Among Us, Injustice Arcade has been specially modified to offer something unique that you can get at home or on your phone. Each play vends one of 200 collectible cards starring one of the DC comic universe characters that can then be played in the game. Superman, Batman, Wonder Woman, The Flash, Green Arrow – it goes on and on! Scan your card into the game using the dashboard card reader. Build a unique team of three in any combination or put characters together that have compatible abilities to unleash a devastating super attack!

Check out Injustice Arcade in action from IAAPA 2017. Video available in 4K HD

Unlike 1v1 fighting games of the past, this has been designed so that players of all ages can enjoy – there is no joystick controller for movement (which is instead handled by the computer), players only need to focus on attacks and blocks. There are four buttons for control – Quick Attack, Block, Strong Attack & Special Attack.

Likewise, if players simply wish to purchase a card from the machine, they can using the ‘Vend Only’ button.

3/2021 – News Alert: Raw Thrills has released their Series 3 game cards! These feature “Boss” characters along with a nice new design to keep them unique and collectible. This series also includes “super rare” team cards. Order yours today and reinvigorate your Injustice Arcade! 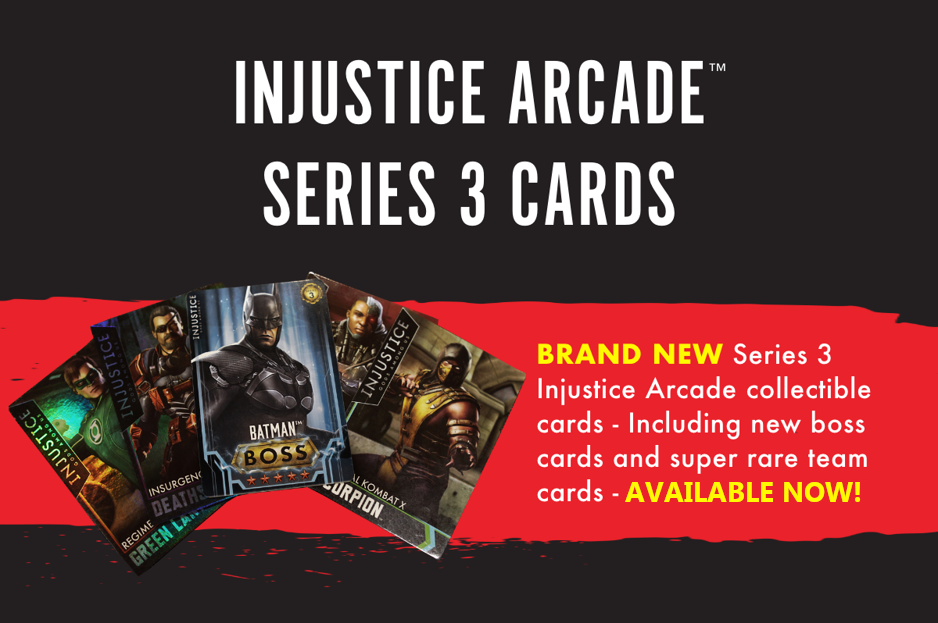 2/2019 – News Alert: Raw Thrills has released new Series 2 game cards! These feature a new design from the Series 1 cards that have been available since the game was launched in 2017, allowing them to be just as collectible. Cards are now available in four different rarity categories, Bronze, Silver, Gold and Platinum. These can be mixed into the batch of existing Series 1 cards, the latter is set to be discontinued. Call us today to order your set of Series 2 cards!

– Modified version of the popular mobile game Injustice: Gods Among Us

– Starring some of the most famous heroes & villains from comic books, including Superman, Batman, Wonder Woman and more

– Vends unique cards with every play! Or users can simply buy a card from the machine

– Scan your cards into the game using the built-in readers (up to three per person, per match)

– Reportedly earning 2x as much as Jurassic Park Arcade during location tests!