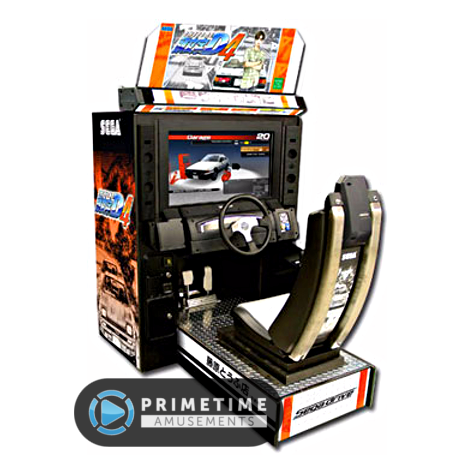 Initial D4 continues the finely crafted tradition of providing technical style racing to the arcade that keeps players engaged and coming back.

Unlike the older games in this series, which were revisions of the original title, Initial D Arcade Stage 4 has a completely new physics engine written by Sega Rosso for the Sega Lindbergh arcade system. This new system allows cars to actually slide, or drift, across the track when turning corners; a feature not present in the older games. Initial D Arcade Stage 4 features animated cel-shaded characters interacting with each other, while the cars and the environment make full use of the updated, high-definition graphics. The controls have also been improved to fit with real racing models, such as the placement of the gear shift being relocated to a lower, more realistic location. With new character customization options, more cars, new game modes and car customization features, Initial D4 is a game that is sure to keep your players happy.

– First Initial D title to use an HD display (32″ LCD) and a new, high-quality sound system

– Sega’s Initial D4 is no longer produced, having been released in 2006. This also marked the last time that Sega brought the series to the USA in an official capacity. Please call us about availability. All used models pass through PrimeTime Amusement’s “Certified Pre-Owned” program, which guarantees that the game will be completely refurbished and ready to operate upon arrival.