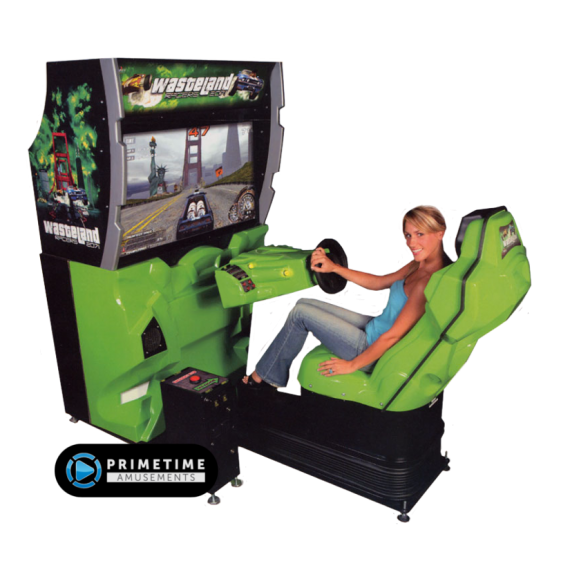 Designed to be a cutting edge arcade title, Wasteland Racer employs two key technologies that made this game ahead of it’s time. First, it was the first arcade game to use a widescreen HD projection display, measuring at 52″ in size. Second, the deluxe version pictured above used Triotech’s motion seat technology that they had developed for the popular Mad Wave Motion Theater and Typhoon simulators. This seat provides up to 2Gs of acceleration and 100 movements per second, allowing players to realistically experience every bump, jump, turn, twist, and crash as they ride souped-up cars through post-apocalyptic race tracks in re-created cities.

Link up to eight cabinets together for amazing multiple player action.Worldwide Ranking – Complete a PERFECT RACE and receive a code to enter your high score online to view your worldwide ranking! A different ranking system is set for each of the 5 tracks.

– Five tracks based upon post-apocalyptic cityscapes

– Souped-up race cars made to fit with the theme

– Deluxe: Features a 52″ HD projection DLP screen; ask about converting over to an LED TV!

– Deluxe: Audio is pumped through the powerful surround sound system

– Deluxe: Motion seat similar to what is found in the Typhoon simulator

– Link up to 8 machines for an incredible multiplayer event

– Triotech’s Wasteland Racers 2071 is no longer in production, having been released in 2006. Please call us about availability. All used models pass through PrimeTime Amusement’s “Certified Pre-Owned” program, which guarantees that the game will be completely refurbished and ready to operate upon arrival. Also ask about our game rentals!

Check out Wasteland Racers 2071 in action: