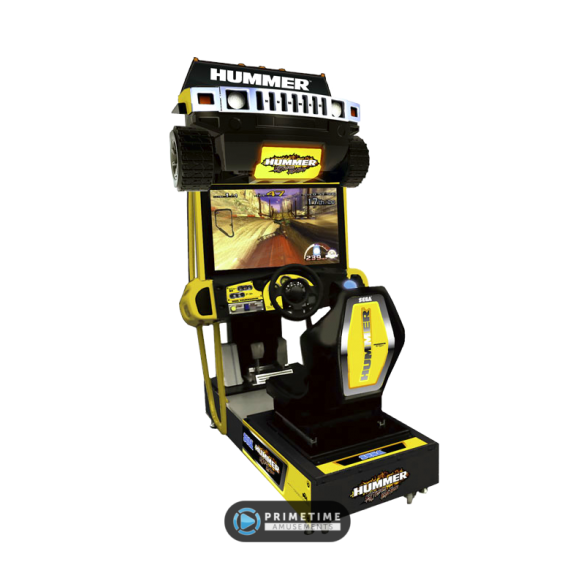 Step on the gas and hit the dirt in Sega’s HUMMER, an exciting on or off-road racing game where monster sized vehicles are the star of the show. No need to worry about gas prices or mileage here!

Officially licensed from General Motors (GM), this includes authentic 3D Hummer models for users to pick and race. Each of the four closed-circuit tracks are designed to get the most out of such a versatile vehicle, featuring fantastic jumps for catching massive air and a plethora of obstacles to smash into for building up your boost meter. Lock-on and attack enemy Hummer’s to gain the advantage in the race.

Check Hummer out via this old Japanese trailer for the game

REFURBISHED STOCK: 8/30/22 – A Hummer unit is currently available from a PrimeTime operated location in Florida. Each will go through our Certified Pre-Owned refurbishing program before shipping to you. Please call for pricing and lead time.

– Thrilling races with plenty of jumps for catching air and obstacles to catch.

– Mini Motion Deluxe: Features a special force feedback seat that simulates the motion of a bumpy road without the game taking up a lot of space. It also comes with Sega’s “Driver Change” system, featuring two steering wheels. Players take turns driving with the game switching between checkpoints or when cars impact with each other. There is also a mode for advanced players where the pair 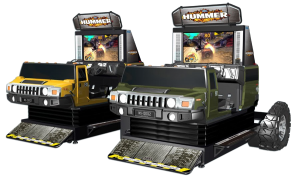 must match each other’s steering to keep the car going on the road!

– Super Deluxe Motion (pictured to the right ->): A larger cabinet with full motion simulation and the first cabinet style that this game was released in. It also features the same Driver Change system that is found in the Mini Motion models but has a larger range of motion and a more detailed cabinet.

– Each unit originally came with a standard two-slot coin door.

– Sega’s HUMMER is no longer produced, having been released in 2009. Please call us about availability. All used models pass through PrimeTime Amusement’s “Certified Pre-Owned” program, which guarantees that the game will be completely refurbished and ready to operate upon arrival.