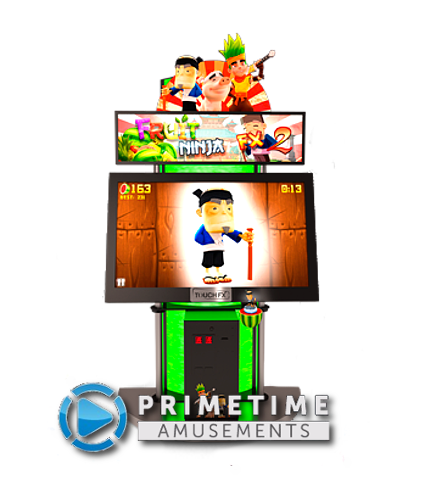 Following up on their big success with Fruit Ninja FX Arcade, the sequel builds on the fun fruit slashing formula by adding new blades, fruits, varied visuals and the Pomegranate bonus.

As a part of each purchase, operators can buy optional figurines which represent Sensei, Katsuro or Truffle. Each character is sold in packages of 12 ($175 per package) and functions just like Amiibos do for the Nintendo Switch, WiiU or 3DS. There is a half-watermelon panel attached to the front of the game. When the player sets their figurine on it, new powers are unlocked for the character, making the experience more fun to play!   Sell these at your redemption counter and promote collecting all three!

The way the game plays is still the same – players quickly swipe their fingers across the touchscreen when fruit appears, slashing and splattering fruit like a true ninja warrior! Watch out for those bombs however – if sliced they remove the screen of other fruit and diminish your timer.

– Sequel to the popular Fruit Ninja FX, which re-launched the trend of video redemption arcade games

– Based on the popular mobile game Fruit Ninja 2

– Collect from 3 arcade exclusive figurines that can be scanned into the game: Sensei, Katsuro or Truffle to unlock more abilities. $175 PER CHARACTER PACKAGE (12 units)

– Easy to learn skill play is fun for all ages

Check out Fruit Ninja FX2 in action at IAAPA 2013