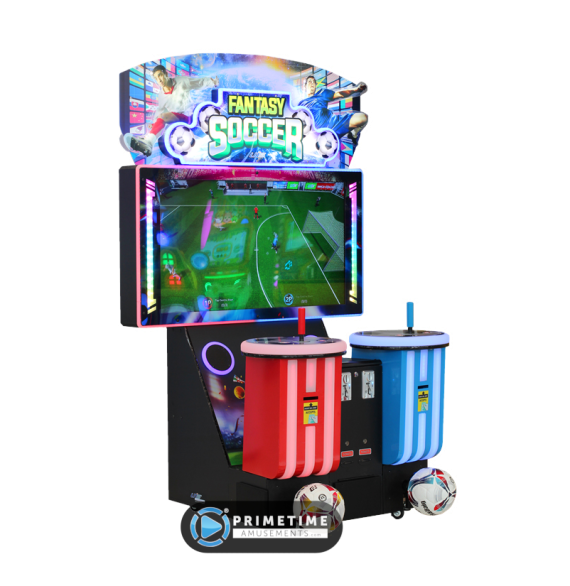 CLICK HERE TO DOWNLOAD/VIEW FOR THE FANTASY SOCCER MANUAL [PDF]

Get ready to make a goal of a lifetime in Fantasy Soccer by UNIS! This listing is for the 2-player standard model, which is slightly different from the deluxe 4-player one.

Fantasy Soccer marks the first time in many years that a proper, arcade-style soccer game has come to arcades. Take control of a “fantasy” team as you seek to score the most goals in a fast-paced match. To make this work for the needs of an arcade, the normal rules of soccer have been shortened to make for faster, but action packed matches! Players can also face off against a friend, selecting your world team to then battle to see who is the best.

With the slightly smaller cabinet and some other changes (no 2nd screen or camera), this makes for a more affordable way to bring the action to your location.

The controls are kept simple, with a large joystick controlling the direction that your player moves and two action buttons(Switch teammates and Run). But the real fun comes into play with the special foot controller – a realistic soccer ball located at the base of the unit that players must physically kick to activate a kick in the game. This is an idea borrowed from the popular World Kicks by Namco that was released in 2001. The game also features numerous country-based teams to pick from and a camera to capture each player’s avatar.

Here is the Standard 2-player version of Fantasy Soccer that was filmed by our friends at ArcadeHeroes.com. Our own footage of the deluxe 4-player version is found here.

– Instant worldwide appeal from one of the most popular sports around

– Graphics are displayed on a big 55″ HD display

– Choose from a number of international (but non-licensed) teams

– Unleash the “Ultimate Skill” for a guaranteed goal winning shot!

Here is a manufacturer produced clip that shows direct footage from the game.