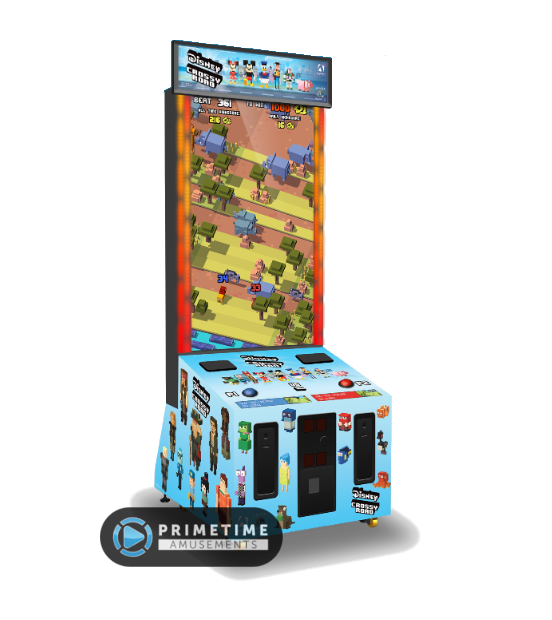 Building upon the wild success of the Crossy Road mobile app and the subsequent Crossy Road Arcade is Disney Crossy Road, an ‘endless jumper’ featuring level design and characters from the wildly popular ‘Disney’ universe.

Just like in Crossy Road, your goal is to hop, dodge and slide your way across a busy lanes of traffic in a randomly generated wilderness. the farther you can make it, the bigger your score as well as ticket winnings! What is even better about this edition of the game is that you select and play as your favorite figurine from Disney and Pixar worlds. Play as Mickey Mouse, Donald Duck, Jack Sparrow, Wreck-It Ralph, Sadness and more!

A second player has been added so that you can compete with a friend to see who can hop along the furthest! The controls have also been simplified down to a single button (players in-game characters will automatically move around objects that get in the way). With all of this on a giant 65″ HD screen, players will want to experience this twist on Crossy Road that is presented in a way that they can’t get on their phones!

– Similar to the classic Frogger in game style – jump along the road avoiding traffic and other obstacles!

– Large 65″ screen is vertically oriented, much like a phone or tablet screen

– Bright and colorful cabinet towers over the competition

Want to see the standard Crossy Road Arcade in person? You can find it at the PrimeTime Arcade inside the X-Treme Action Park in Ft. Lauderdale, FL!