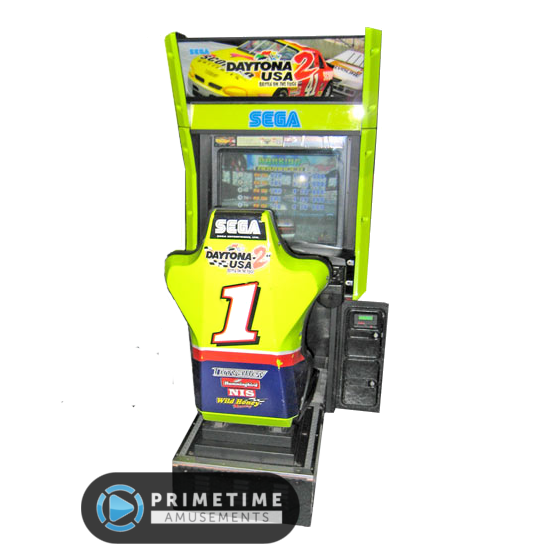 Following up on one of the most successful racing video games of all time, Sega’s Daytona USA 2: Battle On The Edge offers the ultimate stock car racing experience for any arcade.

Daytona USA 2 features improved graphics over the original release with a strong focus on creating the most realistic collision effects that game technology could reproduce at the time. New effects included parts flying around the track, smoke, fire, skid marks and more! These effects are enhanced with the built-in “Crash Impact Generator” force feedback system.

As you come to expect from Daytona USA, drivers stick the pedal to the metal while zooming through a variety of banks and turns. Catch the movements of the pit crew during pit stops and experience the thunderous sounds of actual engines blasting through the true surround sound speaker system.

This listing is for the Single unit; Twin and Deluxe models also may be available.

– Sequel to the enormously popular Daytona USA by Sega

– Incredible attention-to-detail on everything from the courses to the cars to the handling, the crashes and more

– 3 race modes can be played on each course: Beat The Clock (time trial); Real Players Only; No Assist

– Players can chose between Automatic (AT) or Manual (MT) transmission with MT vehicles being able to reach higher speeds!

– Graphics are displayed on the original 29″ CRT monitor; ask about upgrading to a modern LCD display!

– Graphics displayed on a 29″ CRT monitor; ask about our LCD conversions!

– Link up to sixteen (16) units for an incredible multiplayer race tournament!

– Sega’s Daytona USA 2 is no longer produced, having been released in 1998. Please call us about availability. All used models pass through PrimeTime Amusement’s “Certified Pre-Owned” program, which guarantees that the game will be completely refurbished and ready to operate upon arrival.