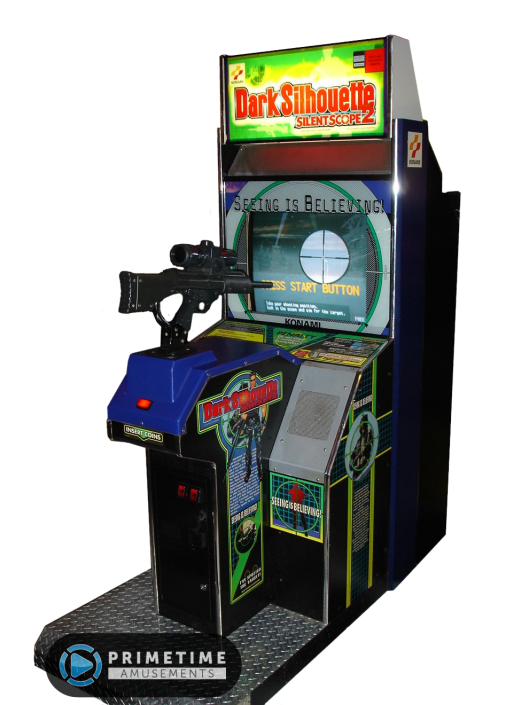 Developed by Konami and released in 2000, this sequel features all new missions, exciting new x-ray and thermal vision and 3 play modes: Story Mode, Shooting Range, and Duel mode. It still features the unique mounted sniper gun with a usable scope up top. This scope has an LCD display inside of it that offers a zoomed in view of where the gun is pointed.

Story Mode continued the Silent Scope story as you must stop terrorists from wreaking havoc with a missile launch. This includes boss battles and great locations such as the Tower Bridge in London. Enemies will often show up in unexpected locations so you have to keep a sharp eye open.

The Shooting Range is just like the name states – you can hone your sniping skills by hitting the targets that pop-up on the range. This features targets both close and very far away.

Duel Mode is for linked machines. Silent Scope 2 allows for linked play so users can team up in the story mode or battle each other in the Duel Mode

– Connect two units together for co-op or competitive play

– 3D graphics are powered by Konami’s “Hornet” arcade system. The Scope LCD is powered by a separate graphics board.

– As this does not require a CRT to operate, we can convert it to a modern LCD. Ask about pricing!

– Konami’s Silent Scope 2 is no longer produced, having been released in 2000. Please call us about availability. All used models pass through PrimeTime Amusement’s “Certified Pre-Owned” program, which guarantees that the game will be completely refurbished and ready to operate upon arrival.