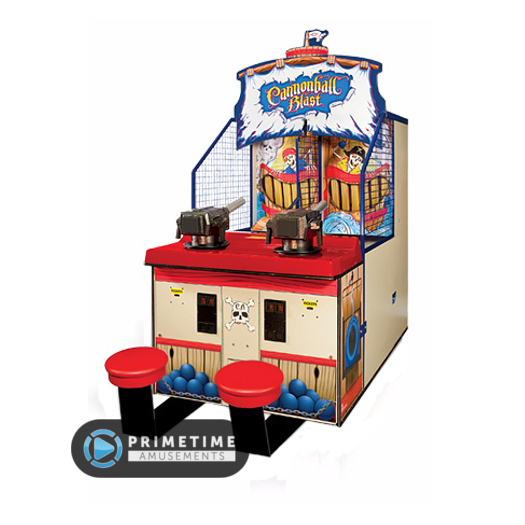 Bay Tek’s great novelty air gun shooting game will have players at sea with the timeless Cannonball Blast. It offers everything about an electro-mechanical experience that players crave.

Players shoot balls at the pirate ship in hopes of knocking down the wooden planks within the pirate ship artwork. Knock down all 6 planks in 3 shots or less and get a chance at the bonus by hitting all 6 planks again with the shots you have remaining shots. At your disposal is a mounted ball cannon, which is connected to an air compressor. This gives each shot a little ‘boom’ that makes it feel like you are firing a real cannon! With two player positions, this game can get competitive as players attempt to out-do their friend! Attached barstool style seating makes each play experience comfortable.

–  The game automatically replaces wooden planks and balls as needed

– Bay Tek’s Cannonball Blast is no longer in production. Please call us about availability. All used models pass through PrimeTime Amusement’s “Certified Pre-Owned” program, which guarantees that the game will be completely refurbished and ready to operate upon arrival. Also ask about our game rentals!