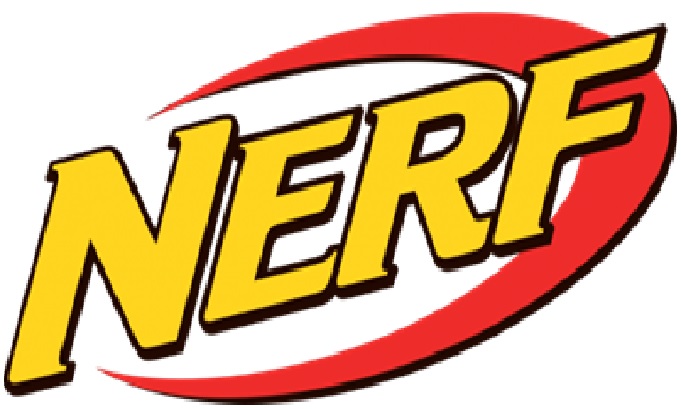 The NERF brand of products have always been associated with juvenile fun in the form of awesome dart guns for people of all ages. If you have grown up in the past few decades, odds are that you have owned, or at least know of, these Nerf shooters. This is especially true with the insane number of models available for sale nowadays. Furthermore with a strong focus on R&D geared towards developing new guns, along with the proliferation of Nerf Squad videos from talented producers such as PDK, this line of products has been going strong throughout the past few years, with no signs of stopping any time soon. Just take a look at the video below:

Heck, we’re way past the age where it would be appropriate to get one of these NERF guns, but we want one, anyway! It is this very popularity that makes this new development so interesting: Last week, Raw Thrills announced their collaboration with this brand to bring us the first-ever NERF arcade videmption game. The new title is simply named “NERF ARCADE” and it consists of about as much fun as you could expect from a company that is entirely dedicated to producing high-end dart guns.

The concept of this game is very simple: up to two players can participate simultaneously by taking a seat in one of the chairs and each manning a mounted gun. The objective is to shoot as many targets that pop up on the screen as possible, with each target granting a certain number of points for tickets. However, the main purpose of NERF Arcade is to operate as a ticket redemption game as opposed to an amusement-only challenge for points like most other light gun arcade titles. This also means that there are no fancy scenarios or story progression; it’s just two players having fun shooting some moving targets. In this sense, the game is more akin to a shooting gallery than an actual light gun title, which is a refreshing change of pace in a category that, as of the past few years, has only received a handful of high-profile games.

It is worth noting that this game does have an amusement-only mode, where players simply compete for the high score instead of tickets. But this is entirely up to the location that operates such a machine; the default mode, and the one which most game centers will use, is to play for tickets.

The cabinet of this game is interesting: It’s designed like one of those on-rail shooter games like Jurassic Park Arcade, but without the enclosed sitting area. It is similar in style to Space Invaders Frenzy, another sit-down videmption shooter, but there is no giant LED billboard screen to take up all of that space in NERF’s case. Each player is also meant to take a seat, in contrast with other similar games that are played standing up. Furthermore, while the guns in the promotional posters look similar to those of the aforementioned Jurassic Park game, the final product could change to include a unique mounted gun designed by NERF exclusively for this title.

The game itself, while very simple, offers a challenge for players of all skill levels in the form of variable difficulties. Players can choose from four difficulty modes that affect both the number of targets that pop up, as well as the speed in which they move across the gallery. Understandably, as players shoot more targets, they will receive more points which, in turn, translates to more tickets at the end of each round. This redemption aspect makes NERF ARCADE a fun and different way to earn tickets that players may trade in for prizes at the end of a long, fun-filled family outing. 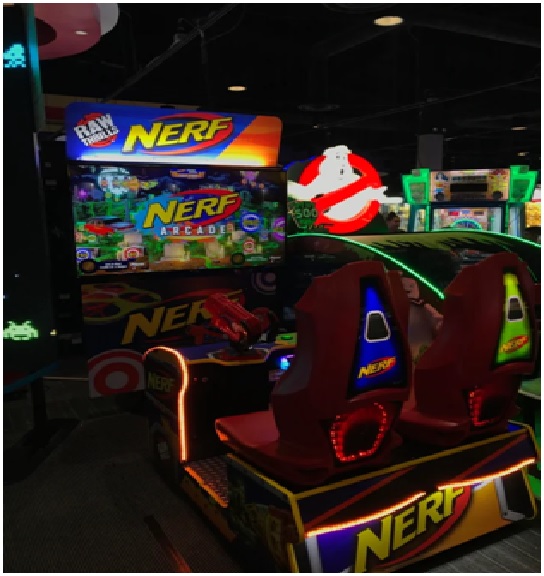 If you’re interested in learning, feel free to read the press release issued by Raw Thrills on this game:

“NERF ARCADE is a high-energy, fast-paced game that is exciting for kids of all ages and family-friendly. Players grab hold of two oversized NERF Blasters and shoot as many targets as possible to win tickets or reach a high score. With 4 exciting levels and skill-based play, it’s no surprise that income reports have been consistently at the top of every test location.

“Hasbro (NASDAQ: HAS) is a global play and entertainment company committed to Creating the World’s Best Play Experiences. From toys and games to television, movies, digital gaming and consumer products, Hasbro offers a variety of ways for audiences to experience its iconic brands, including NERF, MY LITTLE PONY, TRANSFORMERS, PLAY-DOH, MONOPOLY, BABY ALIVE and MAGIC: THE GATHERING, as well as premier partner brands. Through its entertainment labels, Allspark Pictures and Allspark Animation, the Company is building its brands globally through great storytelling and content on all screens. Hasbro is committed to making the world a better place for children and their families through corporate social responsibility and philanthropy. Hasbro ranked No. 5 on the 2018 100 Best Corporate Citizens list by CR Magazine, and has been named one of the World’s Most Ethical Companies® by Ethisphere Institute for the past eight years. Learn more at www.hasbro.com, and follow us on Twitter (@Hasbro) and Instagram (@Hasbro).”

“Raw Thrills is the world leader in amusement games. Founded in 2001, Raw Thrills has designed and manufactured the most iconic games in the industry including JURASSIC PARK ARCADE, HALO FIRETEAM RAVEN, SUPER BIKES, and BIG BUCK HUNTER. Learn more at www.rawthrills.com, and follow us on Twitter (@rawthrills), Instagram (@rawthrills) and Facebook.”