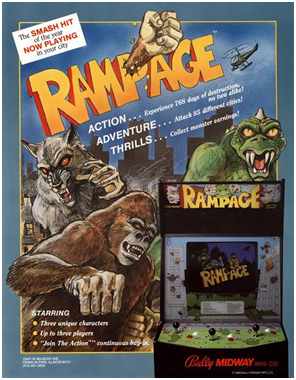 In hectic times like these, what we really need is a distraction from all the hardships and negativity going around the world, and what better way to entertain ourselves than with enacting wanton and rampant destruction on unsuspecting cities? This is exactly what the 1986 classic title, Rampage, is all about.

Originally released by Bally Midway over 30 years ago, and true to its name, this game brought tons of fun to arcade-goers by allowing gamers to take control of three different giant mutant monsters, and go stomping around in over a hundred different levels, with the sole objective being to survive and eat as many humans and crush a variety of different objects to score points. There’s something just so cathartic about going around obliterating everything in your path—we love it, and think you might, too!

In this month’s “Getting Good”, we’re going to show you the basics of Bally Midway’s Rampage and give you a few pointers on how to score big in this classic arcade title.

This game has your typical arcade controls, with an 8-way joystick to control your monster’s movements, as well as two buttons: one for punching and another one for jumping.

It’s worth noting that the objective in this game is to go through each stage causing as much destruction as possible. To this end, your monsters can punch buildings, as well as cling to them by jumping on their sides. You can also punch while hanging on a building, which will cause your monster to rip that section of the structure. And once enough of the building has been destroyed, it’ll crumble and collapse to the ground. Once all buildings are destroyed, the stage ends and the player will be able to move on. 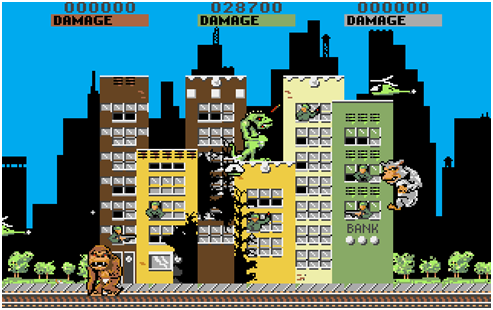 However, throughout every level, you’ll come across different types of soldiers and infantrymen trying to put a stop to your rampage. These characters can either shoot at you, or throw sticks of dynamite, all of which will slowly deplete your strength, which is represented by the bar on the top of the screen. Avoiding damage is nigh impossible due to the size of your monster, and once you take enough punishment, you’ll mutate back to your human form and lose a life.

However, aside from soldiers, each stage also has a variety of civilians, which you can readily pick up and eat to keep your strength up. This is the main way to stay alive during the game’s 768 stages, so you must make sure to eat civilians, instead of just punching them.

Tips for Getting High Scores

Now that we have the basics out of the way, there are a few ways to score extra points in Rampage, all of which revolve around punching specific items in most levels.

First and foremost, every single soldier and enemy unit you punch gives you points. While infantrymen only give a measly 50 points, you can score 200 points by punching enemy tanks, and a whopping 750 for punching the helicopters that swoop by. You might need to be on a building or another type of elevated surface to punch the latter. 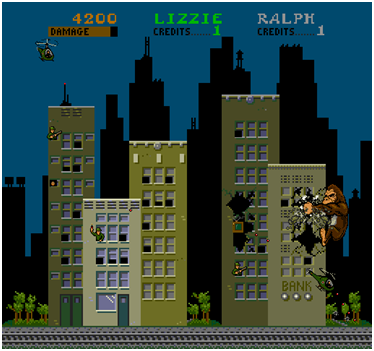 Similar to infantrymen, you also gain points by punching and eating civilians. There are three types of civvies in Rampage, aloof which grant 500 points when eaten. However, depending on your current monster, you can also opt to “hold” a specific type of civilian in your hand to score additional points. George (the giant ape) can hold female civilians; Lizzie (the giant lizard) can hold male civilians, and Ralph (the giant wolf) can hold businessmen civilians. Keep in mind that these civilians will fight back after a while of holding them, which will make you drop them. However, by grabbing these characters, you can score up to 6,000 extra points on every occasion.

Aside from eating and grabbing civilians, destroying certain pieces of property can also help to boost your score. For instance, crushing the different ground vehicles gives you additional points, depending on whether they’re parked, moving slowly, or moving quickly. Here’s a quick rundown of every vehicle in the game and their score:

There are a few environment items that give bonus points when grabbed or punched. These include collectables such as moneybags, which appear after punching safes; food items like milk, turkey, fruit, toast, hamburgers, and tea, and punchable objects like candles, toilet, bathtubs, fishbowls, television, and lightbulbs. However, keep in mind that, for the latter two, they must be powered OFF to give the extra points. If they are ON, your monster will just get a nasty shock when you punch them. Similarly, some of the things that you eat, such as soldiers with dynamite, cacti, toasters, poison, or boxes of dynamite, can actually hurt instead of healing you.

Lastly, some buildings also have neon signs hanging on their sides that, when destroyed, give 1,000 bonus points to the player. But you must only punch them when they flicker OFF, otherwise, you WILL get shocked.