Some of the most iconic video games came into being back in the late ‘70s & early ‘80s, with a plethora of hits finding their way to the market at that time. With amazing titles such as Space Invaders, Asteroids, Pac-Man, Defender, Donkey Kong, Galaga, Ms. Pac-Man, and Dig Dug, among many, many others, it’s no wonder we call this period of gaming the “Golden Age.”

Among these iconic games is Williams’ Joust. This unique title offers thrilling and high-speed action in either co-op or competitive settings, making it among the first arcade titles to feature cooperative gameplay where two players can collaborate on one machine to achieve a common goal. The game is set in a jousting tournament where the last two knights are left to fight against hordes of enemy riders. To this end, the heroes must hop on their powerful bird mounts, and compete to survive in the arena for as long as they can.

Joust features an interesting combat system where, instead of shooting at enemies like so many space shooters of the time, the objective is to run into your opponents while being at a greater height than them, in order to dismount them with your jousting lance. However, this game has a rudimentary physics-based movement system where your birds gain momentum and take time to stop, and to gain and lose height when using your bird’s powerful wings. In this sense, matches typically consist of running back and forth across the ever-wrapping stage, trying to dismount everyone while avoiding getting knocked from your mount yourself.

With that being said, on this occasion, we’re going to share some useful info, tips, and tricks to getting good at Joust.

As we mentioned above, Joust doesn’t have much in the way of active combat, as the only way of defeating your enemies is to run into them while at a greater height than them. In this sense, each player only has two controls: A joystick used to move either left or right across the arena, and a “Flap” button which, when mashed, controls your bird’s wings, allowing them to gain height before running into enemies, or for reaching higher platforms on the arena. Later on, the button can also be mashed to escape the grasp of Lava Trolls, environmental hazards that appear on later waves.

The enemies in Joust are all very similar in appearance, consisting of mounted fighters, just like the player. However, while they may look alike, they do NOT behave similarly: 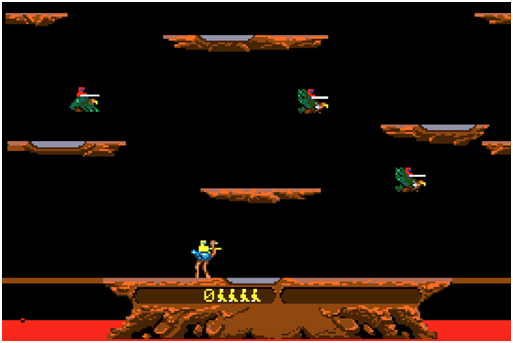 It goes without saying but, pick up as many eggs as you can as these can and will throw a wrench into your plans if left unchecked. This goes for most occasions, unless the times when picking up an egg would cause you to lose a life. In these cases, it’s better to just suck it up and deal with the enemies that hatch from them. It’s worth mentioning, however, that there’s a short period between when the egg hatches and when the newborn enemy hops on their mount, where you can still run over them to prevent them from entering combat.

As you clear waves and progress through the session, enemies will progressively get tougher. Specifically, Bounders start off slower than your mount, and then speed up to match your own bird through the first few waves. Afterward, Bounders get replaced by Hunters; Hunters by Shadow Lords, up until all enemies spawn as Shadow Lords from wave 37 and onward, with a few exceptions. After wave 60, however, all enemies are Shadow Lords without exceptions.

However, while the standard waves become increasingly difficult, there are also a couple of special wave types that can shake up the gameplay quite a bit, including the following: 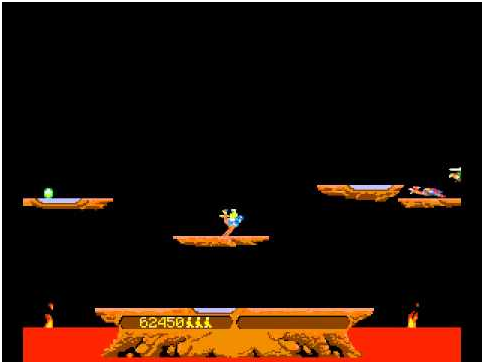 Like with most games of the time, mastering Joust is all about practicing, especially when it comes to mastering the movements. However, with the tips and info we’ve shared in this brief overview, you’re ready to face the challenges with a head start. Happy hunting!