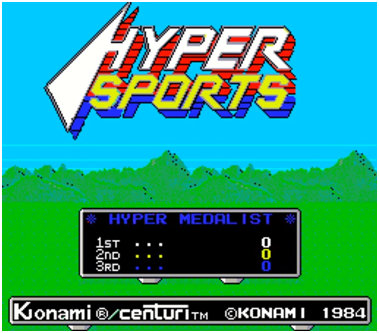 As the sun began to set on the “Golden Age” of video games, there was a certain genre that started to make a new dent in the market; sports titles. However, we’re not talking about games that revolve around a single popular sport such as soccer, basketball, football, or baseball, among others—those are a dime a dozen, especially nowadays. No, we’re talking about those specific games that offered a collection of disciplines in the form of fun little minigames. A virtual Olympics if you will.

The industry started on the back of sports titles like Pong and a variety of other ball & paddle clones that carried simple names like Basketball, Volleyball and Soccer. As the Golden Age was getting started, you saw some more complex titles like Atari Football take hold, although they were quickly swept aside to make room for more Space Invaders machines. By the time the age was winding down, that complexity would increase with the likes of Track & Field and Hyper Sports, both by Konami. Both of these titles would essentially create the mini-game genre, which would later be mimicked on consoles and PC by titles like California Games and Winter Games respectively.

Regardless, if you were a fan of Hyper Sports, or are simply looking for a fun sports arcade game, and the newest “Mario and Sonic at the Olympic Games” is not an option, then this game is definitely up your alley.

Hypers Sports, like many arcade games at the time, is very simplistic in terms of controls. You only have two “Go” buttons on each side of the panel, and an “Up” button in the middle. You’ll be using the Go buttons in most events, while the Up button is contextual and its function varies depending on the game in question.

Hyper Sports has a total of seven events: Freestyle swimming, skeet shooting, long horse, archery, triple jump, weight lifting, and pole vault. In this section, we’ll explain how to do well in each of them.

The objective here is to swim the required distance in as little time as possible. To do this, you will have to wait until the announcer says “Go!” before pressing any of the two Go buttons. If you press it too early, you’ll get a fault. Two faults and it’ll cost you a life. 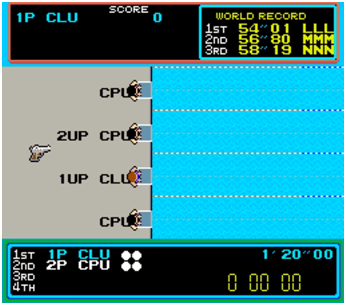 Once you jump in the water, you’ll need to alternate pressing both Go buttons in a rhythmic fashion. The key here is to mash fast, but rhythmically; mashing haphazardly will only slow you down. Every 2 or 3 seconds, a “Breath” text will appear above your swimmer, prompting you to press the Up button so your character can take a breath. Pressing Up when your swimmer doesn’t need a breath will only slow you down. Properly predicting when you’ll need to take a breath is crucial to doing well in this discipline.

The idea of this discipline is to shoot every single target that appears on the screen. These targets will fly through the reticules located on each side of the screen, and you can shoot them by pressing the corresponding Go button at the right moment. 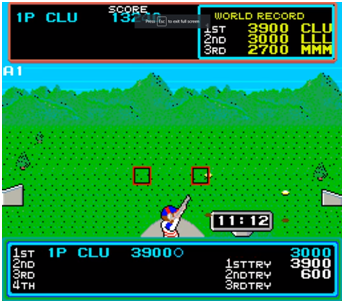 Consistency is key in this game, as shooting consecutive targets without missing will make your reticles increase in size and will make higher-value targets appear. Missing a target, however, will reset both your reticules and the value of the targets. If you score perfectly until the very end, a bonus bird will appear. Shooting it will net you extra points.

Once you finish and (hopefully) shot the bonus bird, a parrot will fly from left to right. You can shoot this target multiple times to rack up some serious points.

This one is tricky and is all about execution. The idea is to use the springboard to jump on the horse and perform a variety of flips, before executing a perfect landing on the other side. 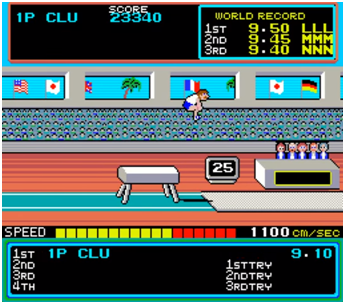 Points are granted or deducted from your total spins depending on your landing.

Just your straightforward-shooting-at-moving-targets-with-your-bow-and-arrow deal here. However, while simple in concept, the execution is an entirely different matter.

In order to execute a proper shot, you must hold down the Up button until you get an angle of about 5.0 degrees. This will ensure that your arrow stays on course as it flies towards the target. However, since the targets are moving, you must also time your button press so that the arrow lands as close to the center as possible; a feat that is easier said than done. 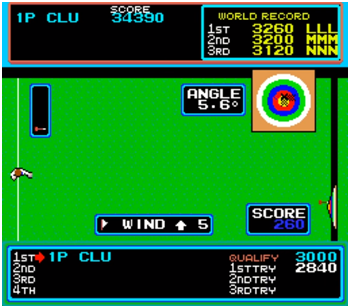 Sadly, there are no shortcuts when it comes to getting good at this event. You’ll just need to practice and get the hang of the moving targets. If you get all bulls-eyes in the first round, you’ll receive a bonus of 3,000. Meanwhile, getting all bulls-eyes in the second round will score you an extra 4,000 points, as well as access to a third round where you can score extra points. Get all bulls-eyes here and you’ll earn an extra 6,000 points and a bonus minigame where you can shoot apples multiple times, getting extra points for every one you manage to hit.

Also called “Long Jump,” the objective of this discipline is to jump as far as possible into the landing area. Before jumping, however, you must first develop momentum by mashing the Go buttons. Once you reach the jump line, you will need to time three consecutive Up button presses to jump in the correct angles and leap the longest distance possible. 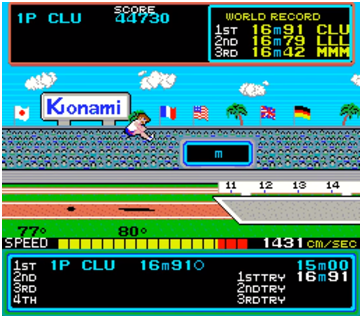 You can also score a bonus 3,000 points in this event by failing the first jump with a foul, and then getting the optimal score on the second try.

Before starting the event, you must choose your weight category. Heavier weights will require much more effort on your part to successfully lift the target. 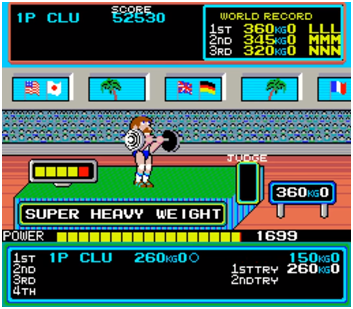 While you’re initially lifting the weight, your arm power will decrease. If you can’t mash the Go buttons fast enough to lift it before your arm power depletes, you’ll drop the weight and fail the attempt.

Similar to the Triple Jump, this event has you mashing the Go buttons to develop momentum before executing the jump. Once you’re near the silver trap where you’re supposed to support your pole, you must press the Up button to lower the pole onto the trap. As your character is climbing the pole, you must keep Up pressed, until he’s completely upright and lets go of the pole. Once in the air, you can mash both Go buttons to increase the height of the vault. After you’re halfway over the bar, you must press the Up button once again to drift to the right, clearing the bar, and landing on the mat below. 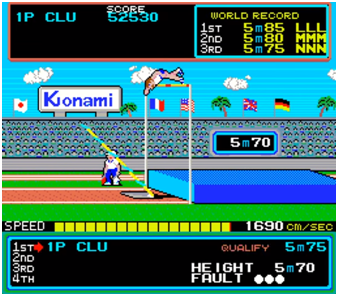 Timing is key in order to achieve the best jump in this event, and sticking the pole on the very last part of the silver trap will net you extra points on every round.

And that’s all there is to the games in Hyper Sports. Some of them require more practice than actual know-how. However, with the instructions we’ve shared here, you can now dive into the game fully prepared for the challenges that await within.