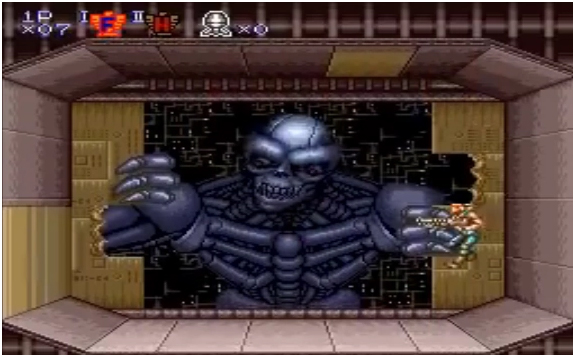 This month in Getting Good, we’re going to step away a bit from the arcade and talk about Contra 3, the smash hit game for the Super Nintendo Entertainment System. This is one game in the series that took the world by storm, providing unparalleled platforming and run n’ gun action for the whole family.

The game is set in 2636 and is a direct sequel to its previous installations. The players take control of heroes Jimbo and Sully as they tear through the hordes of aliens assailing futuristic planet Earth and stop their invasion once and for all.

With the arrival of the franchise to the SNES, Konami could take advantage of the console’s power to provide an improved experience over the previous iterations. Consequently, Contra 3 looks similar to its arcade counterparts, and offers just as much interactivity as them, in the form of objects, both in the background and foreground with which the player can interact in order to reach the end of every stage. Some examples of this include tubes which can be crossed like monkey bars, or walls which the player may climb to traverse vertical levels. Several buildings, walls, and objects may also be destroyed and can be used as environmental hazards against enemies as well. In other words, Contra 3 plays just like its predecessors, but on steroids.

In this first part, we’re going to elaborate on the elements that make up this fantastic game, and also give tips and strategies on how to beat the first 3 levels, so that the next time you want to have some retro fun with this timeless classic, you can do so the right way:

Like the previous games, Contra 3 has its fair share of power-ups, which are dropped when special item containers are shot from the sky at certain points of the game. Drops may include a different weapon, a super bomb called the M-80,000 Helios, which functions similar to the Specials in previous titles, and a barrier shield. Below you will find a detailed explanation of each drop.

Like its predecessors, Contra 3 is divided into several levels through which the player must move from left to right, or up or down until they reach the boss enemy at the end. The game also features several levels in which the gameplay is featured in a top-down perspective, though the objectives remain the same: destroy baddies, kill the boss. In this section, we’ll be addressing each stage and providing general tips and strategies on how to get through them and defeat the boss at the end.

Nothing much to say about this stage. It’s as basic as platformer run n’ gun game stages can get. On higher difficulties, watch out for the dogs eating trash in the beginning of the stage, as they will turn around and run towards the player when he gets close enough, prompting an early death. Other than that, this can easily be beaten by simply running to the right and gunning down everything in sight. Early on, the player may hop into a tank for extra protection and firepower, and to easily dispatch a set of walls that will block the way in several occasions.

Eventually, a bomber plane will level the city, creating dozens of pitfalls and fire hazards that the player will need to climb across using debris and cables as monkey bars. In this section, timing is very important, as the flaming pillars will rush across in certain patterns, and the player will have to time their advances just right if he wishes to make it to the other side in one piece.

The boss of this stage is Slave Beast Taka, the alien turtle monster which shoots blue beams from its mouth, red projectiles from its shoulders, and spawns annoying flies from its shell. The strategy here is just as straightforward as the stage itself: shoot the big bump on his chest until it dies. The Homing upgrade can help to easily dispatch the flies that Kimkoh spawns, while the Laser is amazing for dealing maximum damage to the weak spot. Shortly after the battle begins, the boss should burst into flames and succumb to the player’s superior firepower. 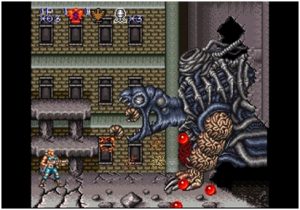 The first stage of this game that is played from a top-down perspective. In this level, the player must choose a landing spot, traverse the hazards of the highway, and dispatch all enemies and strongholds occupying the zone. After the deed is done, the player will get transported to the boss arena, where he will have to face against Metallican, an alien machine that resembles a bug with many legs.

In order to beat Metallican, the player will have to destroy its leg bulbs first, which continuously fire a stream of projectiles until they are dealt with. Afterwards, the player will have to destroy the monster’s tail, which is arguably easier than dealing with the legs. Once this phase is complete, Metallican will start jumping high into the camera, and then fall down in an attempt to crush the player. In this phase, he must dodge the falling monster, and concentrate fire on the last remaining weak spot, the head. After a few moments of receiving damage, Metallican will go down, and the day will be saved. 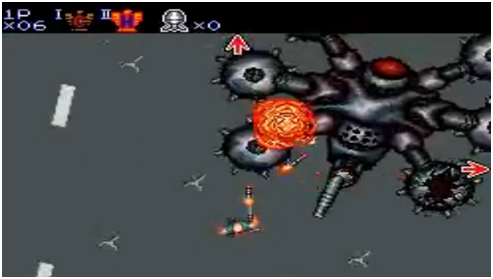 This is where things really start to get tricky; monsters will be pouring out of every nook and cranny, flying enemies are very common, projectiles rain down from the sky, and there is plenty of platforming and vertical exploration involved, as well.

It starts off fairly straightforward, identical to the first stage. Before long, however, the player will have to hang onto some poles while climbing up, fending off some flying baddies while trying to stay alive. This marks the beginning of the vertical section, where the player will have to climb up while dodging missiles, and also shooting down enemies and projectiles that get too close. In this section, the player fights the stage’s first mini-boss, the Rotating Gun.

The first phase of the flying orb-like enemy is simple, it consists of dodging missiles while hanging on to the enemy’s rotating poles, and dealing damage when the poles line up with its weak spot. This phase doesn’t take too long to complete and can be dispatched quite easily. After the boss flies off, the player must continue climbing, only to be confronted by the Rotating Gun again, only this time in its second form. In this phase, the boss will deploy its legs and trap the player beneath it. The player must continue climbing while dodging both missiles, as well as the boss’ spiky feet, all the while firing into its weak point until a certain distance has been traveled and the boss transition into its final stage.

Phase 3 begins when a pair of spiky platforms are deployed both on top and below the player, right where its feet are stationed, trapping the player and forcing him to beat the boss in order to advance. Luckily, in this phase, the boss stops firing and resorts to trying to tackle the player in order to dispatch him. He must dodge the boss when it charges, taking into account that it might feint several times before advancing, and deal damage to its eye while keeping alive. After a lengthy battle, the boss explodes, and the way will be opened for the player.

After finishing the long climb, the stage resumes in regular horizontal fashion. As usual, the player must dispatch enemies and dodge hazards until encountering the next mini-boss, the Squito Nest. Fortunately, this one is much more simple than the Wall Walker above. Over the course of the fight, the nest will drop grenades that can be easily side-stepped, as well as soldiers from the sides, which can be dispatched with 1 shot each. The player must shoot the Nest while it’s dropping soldiers and, after enough damage has been dealt, it will explode, marking the end of the battle.

After advancing further to the right, shooting some turrets, and climbing up some more, the player will arrive at the arena of the final boss of the stage. But before fighting it, he will have to deal with yet another miniboss.

This last miniboss consists of a pair of fighting robots called BOB 1 and BOB 2. The red robot will shoot projectiles straight at the player, and will also jump around the arena when he gets into melee range. The blue robot will fire straight at the ground, completely destroying the possibility of a ground assault. At the beginning, the player will have to hang from the roof and unleash hell on the closest robot. If the red robot is close enough and starts to jump, the player will have to climb to the other side of the arena and resume firing from this new vantage point. After receiving enough fire, the robots will lose their legs and begin to crawl around the arena, frantically trying to tackle the player. After a few more bullets, they will be completely destroyed, setting the stage for the real final boss. 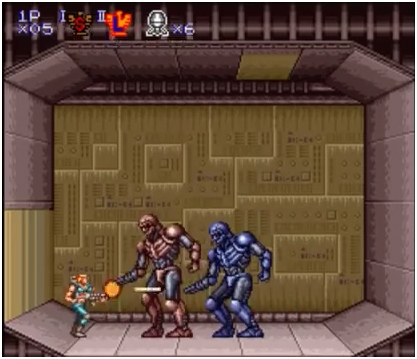 As soon as the robots disappear, the final boss, Big Fuzz will impale the background of the stage with razor-sharp talons, and open the blast doors, peering his ugly head inside and prompting the beginning of the grueling encounter.

Luckily, this boss follows a set pattern of 3 attacks; after the third one, he will cycle back to the first, and repeat until killing the player, or meeting his end. The first attack consists of a laser that follows the player until hitting him, or after enough time has passed. To avoid this attack, the player must climb to the highest point in the side walls, but without actually hanging from the roof, and wait until the laser comes close enough before jumping onto the ground and dodging the attack. The second attack consists of flames spouting from the robot’s mouth and traveling across the arena in a clockwise manner. The player must quickly climb on the walls and across the roof, dodging the flames until the attack ends. In lower difficulties, the flames move quite slow, but on higher settings, the player will need to run for dear life until the attack ends. The third and final attack consists of several time bombs spawning throughout the arena. The player must simply get out of the way before they explode in order to stay safe.

Suffice to say, this fight consists of dodging attacks while trying to find the space to fire at the boss’s head. After enough damage has been dealt, Big Fuzz will lose his grip on the blast doors and will be decapitated by them, marking the end of the boss fight, and presenting the player with a pretty exhilarating victory screen.

That’s it for the first three stages of the game. Stay tuned for next week’s edition of Getting Good, where we’ll explain the last 3 stages of Contra 3, and give you the best tips on how to defeat Red Falcon and his band of ruthless aliens!

PTA Featured in RePlay Magazine: PrimeTime Gears Up for IAAPA