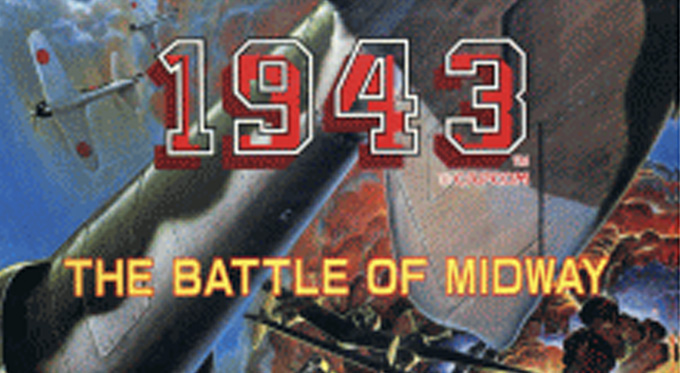 Everyone loves a good shoot ‘em up game: the combination of fast-paced, high-octane shooting, coupled with getting to know the patterns of enemies and bosses in each stage. This makes for rewarding and exhilarating game experience. 1943: The Battle of Midway was a bold move by Capcom (the developer and publisher), considering the events that had shook the world only four decades before its release. Nevertheless, despite its potentially controversial setting, it seems the public cared more about a good game, and received it with critical acclaim. As a matter of fact, 1942 (the predecessor for The Battle of Midway), was one of Capcom’s first breakaway titles in the arcade industry, which allowed them to establish their identity as developers and distinguish themselves from other studios. 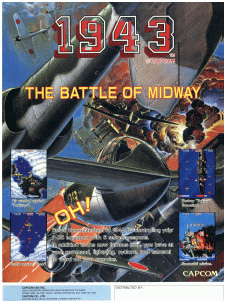 That being said, 1943 is a simple yet entertaining title, ideal for both casual and veteran gamers alike. The difficulty is just right for it to be fun, without functioning as much of a barrier to entry-level gamers. Suffice to say, this isn’t a game you play for the ‘street cred’ at your local arcade; The Battle of Midway is usually played for fun, or as a warmup for other, more demanding titles.

1943 is a vertical-scrolling shoot ‘em up game where the player takes control of a P-38 Lightning participating in the battle of the Midway Atoll. The objective of the game is to combat the enemy forces, make your way to the end of each level, and defeat the boss (or the swarm of enemies) at the end, like in many other shoot ‘em up titles. The game spans across 16 different stages, 11 of which consists of air-to-sea engagements, with a destroyer-class battleship or an aircraft carrier boss at the end. The other 5 stages revolve around aerial battles where the final boss is a big bomber.

Unlike its predecessor, players in 1943 only have 1 life. However, instead of losing it in a single shot, players have a health bar in the form of a fuel gauge which steadily depletes as the player progresses through the stage, or after performing the special lightning attacks. Fuel, however, can be recovered by picking up the ‘Pow!’ powerups that some enemies drop. Similarly, the plane’s weapons and health gauge can also be upgraded by picking up special powerups which drop after defeating formations of red enemy planes. These improvements will give the player the edge they need to take the fight to the enemy, and defeat the Battleship Yamato at the end of the final stage. 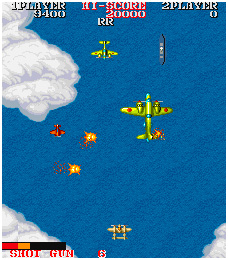 Right off the bat, the first thing you’ll want to do in order to gauge the challenge of the specific machine you’re playing on is by determining its difficulty level. 1943 can be played in 16 difficulty levels, the default being 10. Said difficulty can be adjusted by the owner of the machine before setting up the game itself. A quick way to discover the current difficulty setting is by immediately flying your plane to the bottom of the screen and waiting. If the enemy planes fire one or two shots at you, then the machine is likely at level 10 difficulty or more. If the enemies manage to shoot sideways at you as they reach the bottom of the screen, then the game is very likely on the highest or near-highest difficulty. It’s important to know these settings as they will affect the amount of projectiles enemies shoot at you, as well as the number of enemies that will attack at any given time.

It’s worth noting that the number of enemies, as well as their difficulty will naturally increase as you progress through the levels.

Enemies in 1943 are not too varied. Standard enemies come in the form of planes of 3 varying sizes. The small planes are general nuisances which fly across the screen in several patterns. These patterns increase in speed and complexity in later levels. The medium planes are slower, bulkier, and will often dive below the player’s altitude to avoid several shots. The large planes are, by far, the most ‘tanky’ enemies, taking several shots to destroy, and some even requiring to be shot down several times before finally getting destroyed. The first large plane you encounter will require to be shot down 3 times before getting destroyed, and will reciprocate by shooting a fan of bullets on each occasion. The second large plane is a bit weaker, but will regularly summon aircrafts to aid it in battle.

There are special formations of red enemies that take single shots to take down each of their planes and that, when destroyed in their entirety, will guarantee a powerup drop in the form of a ‘Pow!’ symbol, or an aircraft icon. If presented with the ‘Pow!’, the player can shoot it to cycle between different the four different weapon types, before picking it up. The aircraft icon will summon two wingman that can protect the player from two sources of damage, and triple his firepower while they remain active. 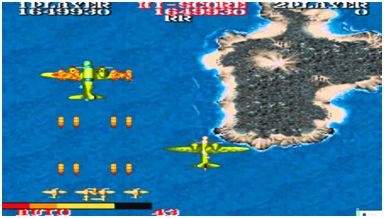 Besides the regular gun, the player can pick up several improvements to increase their firepower, along with their odds of surviving the ensuing onslaught of enemies.

The wingmen acquired from picking up an aircraft icon can also be upgraded with both the Auto and Shell powerups. The former grants up to 4 additional auto cannons (2 per plane), greatly improving the player’s firepower. The latter, gives each wingman an additional shell weapon, as well.

Bosses in this game are fairly straightforward, just like in most other shoot ‘em ups. In this game this is significantly more so, since they usually consist of fleets of smaller enemies that must be destroyed in order to advanced to the next level. The only difference is when encountering the bigger airplanes or the enemy battleship, which are usually much more sturdy and will require a hefty amount of shots to be destroyed. Otherwise, they are pretty much the same as any other type of enemies. 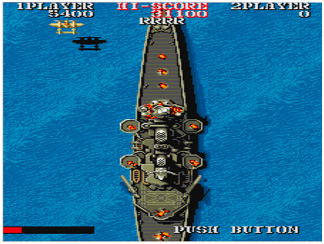 Keep in mind that, in order to surpass the bosses, at least 70% of the targets must be destroyed in order to receive bonus points, as well as free refuel at the carrier. Players have two opportunities to destroy the targets and, should he fail, he will forfeit any bonus, as well as the free refuel, a fact that might complicate matters in the stages to come.

With these tips in mind, you are now prepared to take on the enemy forces, deliver ultimate doom to the enemy battleship and, above all else, set the high score on your local arcade.

The Guide for the Easy Financing of Your Arcade Games