We’ve covered plenty of titles in our running series where we share tips, tricks, and info about how to get good and set high scores in the popular arcade games of yore. At one point, this included Arkanoid, the 1986 block-breaker arcade game inspired by Atari’s highly popular Breakout, released 10 years prior. On that occasion, we shared lots of key information, as well as tons of strategies to help players get acquainted with the basic gameplay of this title, and to help them improve their game and set the highest possible scores. And in that same vein, today we’ve come to talk about another game in the series, this time revolving around Arkanoid: Revenge of Doh.

Also known in some platforms as Arkanoid II: Revenge of Doh, or simply Arkanoid II, this series was one of several Atari Breakout clones on the market, but one that became arguably more popular than Atari’s 1976 smash-hit. Released just one year after the original Arkanoid, Revenge of Doh offers more of the same brick-breaking, power-up-picking, and ball bouncing goodness from the original, but with a new premise consisting of the main big bad from the original, Doh, coming back and wanting to get back at the Vaus. This time, you’ll be fighting for your life as you pilot the Vaus space vessel once again and try to eliminate Doh for good!

Of course, the premise of these games is mostly just to give a bit of context to the gameplay. And while this concept does nothing too original, especially for today’s standards, Revenge of Doh does have some unique mechanics that set it apart from the rest. Some of these innovations include the addition of Warp Gates at the end of every level, which when used, will determine the layout of the next level. Moreover, there are also new notched silver bricks that regenerate after being destroyed. And finally, there are also some blocks that move horizontally as long as their paths aren’t blocked by other bricks, making them harder to destroy.

Just like its predecessors, the controls in Arkanoid: Revenge of Doh are as simple as always: The player has a paddle to control the Vaus, which can only move left or right; a button with which the player can shoot lasers when the appropriate power-up is picked up, and a set of buttons to determine whether the player is starting a 1P or 2P game. 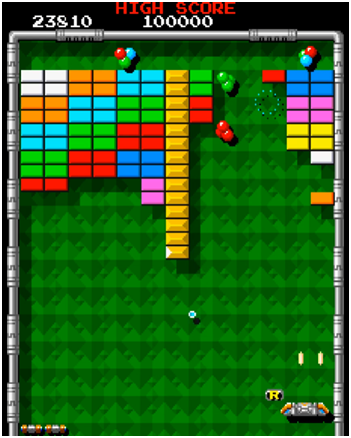 Like before, the objective is to use the Vaus to bounce a ball upwards at a series of bricks, which take a varying number of hits to destroy. A stage is completed once every applicable brick is destroyed. And to aid in this endeavor, the Vaus can pick up a variety of powerups, which are sometimes dropped by destroyed bricks, and which can transform the vessel in many ways. From enlarging and shrinking its length, to enabling it to shoot lasers at the bricks, or even cloning it or temporarily making it leave a trail of reflective beams in its wake, there are many ways to upgrade the Vaus in Revenge of Doh.

Speaking of which, here is a list of all the powerups that you’ll find in this game: 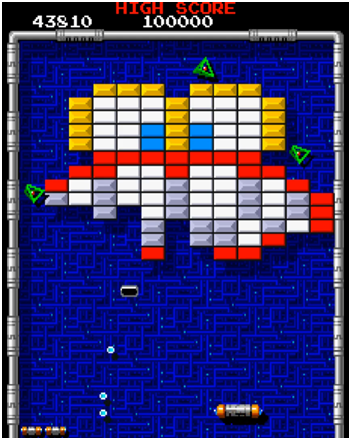 As with any other Arkanoid games, there really aren’t any shortcuts to getting good, though knowing what to expect from any of the power-ups can give you an idea of how to use them best. Revenge of Doh, however, has the particularity of their stages having two possible layouts each, with the exception of the two boss stages.

Whenever you beat a stage, you’ll be given a choice of path before proceeding. Depending on what you choose, you’ll get a different stage layout. This doesn’t affect anything in the grand scheme of things, and you can choose any side that you want at any given moment with no repercussions—it’ll simply affect the version of the next stage that you’ll get. 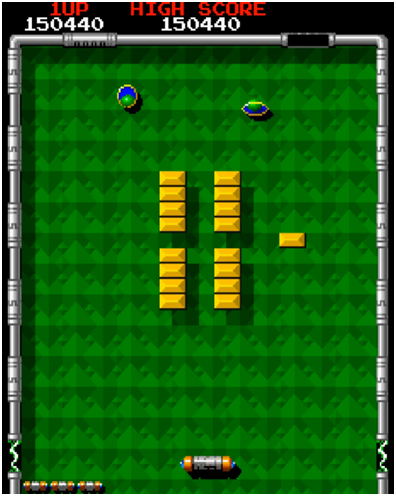 Another thing worth pointing out here is that the Vaus is basically invulnerable to the enemies. In other words, they can go through the ship freely without causing any harm. However, the ball can bounce on the enemies, possibly greatly changing its trajectory and causing you to miss your next move and losing a life.

Similar to its predecessors, the same strategies that worked for the other Arkanoid games are valid here. Namely, the Laser power-up is completely overpowered and you should get it whenever you can, as it will let you essentially blast through the stages unimpeded, as long as you can keep the ball in play at the same time. Similarly, in order to cause maximum destruction, a good idea is always to focus on creating a lane down a single path, up to the roof of the stage, and launching the ball all the way back so it can get behind the bricks and cause maximum destruction by bouncing between the roof and the blocks. Be careful with this strategy, though, as it will cause the ball to speed up very, very quickly, and you’ll need to be ready for it when it eventually comes back down.

Regardless of your approach, practice will always make perfect when it comes to Arkanoid: Revenge of Doh.