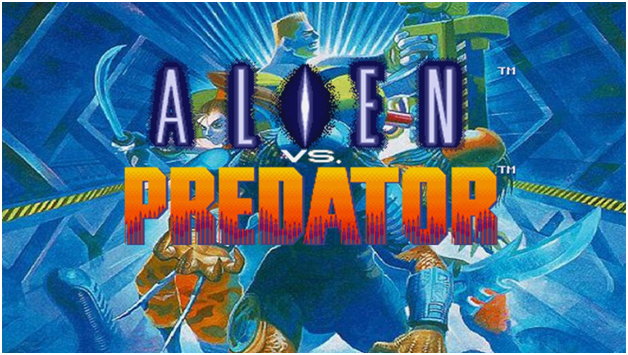 Did you know that a new Predator movie just came out? Nowadays, franchises that we think are already laid to rest tend to resurface with a sequel, spinoff or, in most cases, a reboot. This particular movie is one of the latter, as it aims to pay homage to the original Predator. In that movie, world-class action star Arnold Schwarzenegger played the role of Dutch, a member of an elite squad of soldiers sent to a jungle in Central America to combat an unknown threat. According to the synopsis of the most recent film, the newest reboot of the series revolves around the following events:

“When a young boy accidentally triggers the universe’s most lethal hunters’ return to Earth, only a ragtag crew of ex-soldiers and a disgruntled scientist can prevent the end of the human race.”

So, in many aspects, this one is close to the original. Furthermore, now that we have a new Predator movie, what better time to take a look at one of the series’ arcade games?

Technically, Alien Vs. Predator belongs to a different series, which is the eponymous one where the Xenomorphs from Alien face off against the Yautja from Predator. Nevertheless, our fearsome hunters make an appearance and even take center stage at times in the AvP movies, and that’s good enough for us.

So without further ado, let’s take a look at the guide:

The Alien Vs. Predator game originally came out in 1994 and was developed and published by Capcom. Like many games at the time, this one was another sidescrolling beat ‘em up in which the player could take control of 4 different characters. The story revolves around two USMC soldiers, Lieutenant Linn Kurosawa and Major Dutch Schaefer (the same one from the original movie), who are both posted in San Drad, California when a Xenomorph invasion overruns the city. Abandoned by their squad mates, everything seems lost for both Marines. However, when they are surrounded by aliens and about to perish, two Predators rescue them and ask the soldiers to join them in stopping the alien invasion. 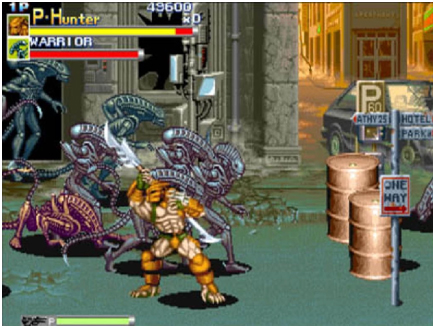 In comparison with other games, AvP is relatively straightforward; the stages go from left to right with no deviations, until players face off against an end-level boss. Defeat them to move on to the next stage, rinse, repeat.

Characters
There are four playable characters in this game:

Enemies
The only enemies that you’ll encounter in this game are of the Xenomorph variety, with some humans in between:

Walkthrough
As we mentioned above the stages are very straightforward, and only require walking from left to right. As such, we’ll describe the challenges that you’ll face on every stage, as well as tips on defeating the respective bosses.

Stage 1
The Alien Swarm has taken the city of San Drad. Venture through the streets taking them out as you go. You slow down their invasion by bringing an end to Chrysalis, the stage’s boss. Since this is the first stage, the Chrysalis itself is a relatively easy boss, only made tricky because he constantly spawns minions to defend him. Use ranged weapons to keep the foes at bay, and only approach Chrysalis after he finishes spinning, which is when he is most vulnerable. You can also hit him with ranged attacks to knock him down and get closer while he gets up.

Stage 2
What is a retro beat ‘em up without a sewer level? In this stage, you must make your way through the city sewers to escape the Xenomorphs, and face off against a Razor Claw at the end. Like the Chrysalis, the Razor Claw is guarded by several minions. However, it is much easier to approach and combo the boss as it doesn’t spin around as the Chrysalis does. You will also find guns on the ground, which you can use to inflict considerable damage to the boss. In any case, just approach and combo it until it’s dead.

Stage 3
After escaping from the city, the heroes board an armored vehicle to make their way toward the hive. In this stage, you have infinite bullets on your ranged weapon and your objective is to stop the Xenomorphs from swarming the vehicle. This stage is easy and short; just shoot away at the oncoming Aliens and don’t let them get on the vehicle. Even the stage boss, Arachnoid, is as weak as a regular enemy so you might accidentally hit and kill it without even noticing.

Stage 4
After arriving at the hive, the heroes must eliminate many Xenomorphs and destroy the Queen responsible for the current swarm. This stage is quite long, so try your best to avoid taking damage if you want to make it to the end. After making your way through countless Aliens, Infectoids, Chestbursters, and even some Royal Guards, you engage the Queen. The Queen is immobile, and attacks with her long tongue, tail, and by spitting acid. However, you can make short work of her by picking up the rifle that drops from the crates, which can rapidly drain her HP with its automatic fire.

Stage 5
After cleansing the hive, the heroes see as a USMC dropship crashes into a nearby forest. Shortly after, they come under attack by human enemies. The heroes must make their way to the crash site to investigate. Most of the enemies in this stage have ranged weapons, so closing the distance before they can shoot is paramount for saving health. The boss in this stage is a Power Loader that hits very hard in close range. Also, it can use a rush attack to get in close range. Luckily, its downfall is the minions that it summons as they drop powerful rifles that can be used for destroying the Power Loader from a distance.

Stage 6
The fight escalates to a nearby bio-war lab that the corrupt USMC officials are using to experiment on both Predators and Xenomorphs. There is a bonus round in this level that requires you to destroy a control box when you board the elevator. If you clear this stage, you can get a bonus of 30,000 points. To do so, use the weapons that are scattered on the ground. The boss in this stage is the Mad Predator, which can be very tough as he is quick and hits hard. To avoid his lunge attacks, keep moving around the arena. Try to attack him only after he descends, which is when he is vulnerable.

Stage 7
The final stage takes place on the corrupt USMC official’s ship and is the longest stage in the entire game. You’ll have to fight against two Chrysalis, two Royal Guards, two Power Loaders, and an Alien Queen at the end. All enemies except the Queen are the same as their previous iterations. The Queen, however, is much stronger and not rooted to the ground as in the last encounter. She also summons Chrysalis to aid her in this fight. Luckily, there are more than enough power-ups on the ground to destroy her and her minions. Focus on moving around the stage to avoid her powerful attacks, and retaliate only with your own ranged shots. The key is to avoid getting hit at all costs as it is easy to get overwhelmed by the constant barrage of enemies.

And there you go; you won the game and stopped the Alien invasion on Earth! Do you have any other tips on how to beat this awesome game? Let us know in the comments down below!