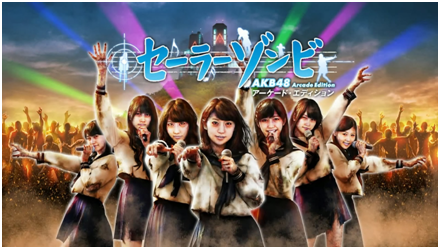 In their perpetual display of oddities and inclination towards eccentric pieces of media, Japan has one again surprised us when we discovered this arcade cabinet from 2014, Sailor Zombie. Now, we know what you might be thinking after reading a game with this title: “Surely it must be about a zombie outbreak that happens on a boat or vessel, and the objective is to make it out alive!” Well, if you thought that, you probably aren’t familiarized with Japan very much.

Jokes aside, Sailor Zombie was a game developed by none other than Bandai Namco Amusements, based on the massively popular AKB48 Jpop idol group. They are ubiquitous in Japan, and are associated with a ton of different ads as well as many hit songs. You can’t really go a single day in the country without looking at ads or posters with the AKB48 idols in them. However, as with most things that blow up in pop media, the idol group’s franchise expanded to more than just the musical industry, and branched out into video games.

Now, games based on AKB48 have been released since 2010, with them dominating mostly the visual novel and dating sim genre. In fact, the AKB1/48 series is one of the most popular among the video games based on the group, as they are mostly dating sims where players get to choose an idol and spend time with them. In 2014, however, Bandai Namco broke the VN streak by releasing the group’s first arcade game, Sailor Zombie: AKB48 Arcade edition.

While in the other titles, the objective was to spend time with and date the different members of the Jpop idol group, this time around, they had become infected and turned into zombies, and the only way to cure them was by using a Love Vaccine, which a fancy-pants way of saying “you need to shoot them with your special gun until they’re healed”. We realize the premise of this game and the way you’re supposed to cure the virus in it could have aged poorly, considering the debacle that was the year 2020, but it’s still a curious game.

A typical round of Sailor Zombie started, just like with the other games, by choosing an idol from the group, after which the game began with an introductory cutscene. After a fateful meeting in a dark alley, our protagonist ran into his chosen idol, only to find she has been infected and turned into a zombie. However, using his handy Love Vaccine, the player must administer the cure in the only way they can, by aiming at the screen and squeezing the trigger. This immediately turns the idol back into her human form, and then the game transitions to the regular gameplay. 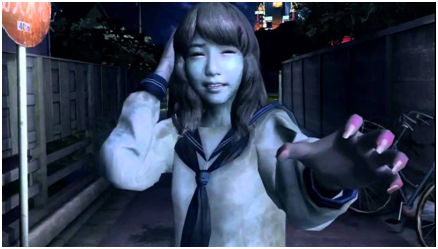 Despite appearing like a light gun shooter, Sailor Zombie is actually a hybrid rhythm game with precision shooting aspects. The objective is to travel through different stages, like in House of the Dead, shooting down the infected citizens, including other idols and people. And in between stages, players are treated to a cutscene music video of the idols-turned-zombies performing some of their hit songs, singing and dancing to the beat. In these cutscenes, the player is presented with a rhythm minigame where they must press the buttons correctly to the beat to increase their score. 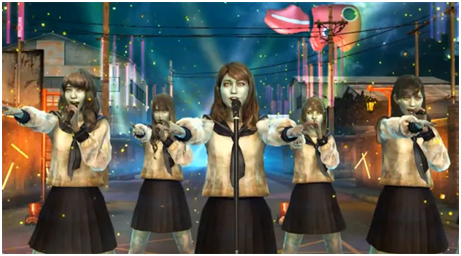 However, one of the biggest drawbacks of this title, curiously enough, didn’t have anything to do with it itself, but with its cost. A single play would set you back around $2, and you’d need about 15 lives to complete it since it’s really difficult and unforgiving. In other words, it cost you around $30 to finish Sailor Zombie, or almost half of what a full-price PC game would cost you. Suffice to say, only the most committed AKB48 fans would sit down and try to beat it.

Despite the idol group still being around and quite popular to this day, even spawning numerous other groups in the same family, this game was a curious notch on their history, which we found really interesting to find and research. Oh, and in case you were wondering: Yes, it’s called “Sailor” Zombie due to the typical schoolgirl outfits that the idols wear.