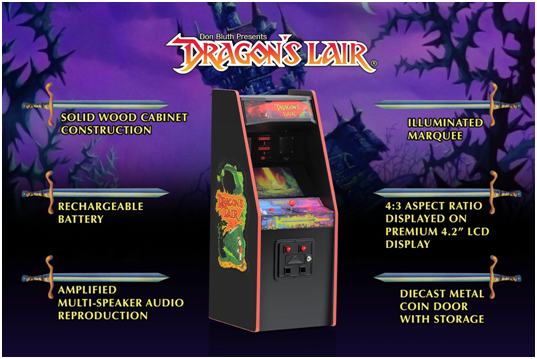 New Wave Toys, the manufacturer of the recreations of some of the most iconic games of the 80s and 90s, have done it yet again. This time they have gone with a double whammy of both  Dragon’s Lair and Space Ace mini arcades. These new entries are a part of their ongoing line of “RepliCade” cabinets, which are 1/6 scale miniature versions of the original titles, at a very accessible price tag, but without shirking on any of the visual and aesthetic details that made their counterparts shine in the past.

It had been a while since the last time New Wave had worked on a new game or conversion for their RepliCade platform, which is why it was a pleasant surprise to see that they are releasing not one, but two new games this month. Granted, while the Space Ace title is a new one to the series, the Dragon’s Lair cabinet is actually an overhaul of a previously existing game in their catalog, but with new features, so they’re giving it the “new game” treatment. Moreover, while both games are different titles, you could say that both Dragon’s Lair and Space Ace are like two peas in a pod, considering that their gameplay is very similar, and they both feature gorgeous and energetic Don Bluth animations.

For those who are unfamiliar with these styles of games, Both Dragon’s Lair and Space Ace consist of a series of individual scenes, like you would see in a TV show or animated film, where we can see our protagonists going through a series of obstacles or hazards. And while most of the gameplay plays off through animations in these scenes, the player must press the correct input at the right moment in order to guide the heroes to safety, and onto the next scene.

In terms of plot, these games were all the rage at the time, though their formula might be a bit worn down at this point: Both games revolve around controlling a brave hero who must overcome many adversities to defeat the big bad guy and his henchmen, and rescue the damsel in distress. And while the circumstances vary greatly in both titles (after all, one takes place in a medieval setting while the other is set in the far future of spaceships and technology), you will find many similarities in both plot and playstyle.

Nevertheless, these two games have gained a bit of a cult status through the years, what with their fantastic animation style, cliché-in-a-good-way and riveting cutscenes, as well as by being a few of the titles produced and designed by the legendary Bluth himself. This is precisely why a Replicade release is such a big deal, especially if you want to enjoy everything the games have to offer in collectible forms, but don’t want to break the bank trying to acquire the original cabinets.

Both the Dragon’s Lair and Space Ace cabinets are available for pre-order on New Wave Toys’ website, and are estimated to begin shipping in Q1 2023. The games will go for $169.99, though there is currently a pre-order sale for $149.99. Feel free to check out their product pages to learn more about these two awesome products.