Earlier in October, during UNIS’ Showcase 2020 Event, the popular video arcade game manufacturer unveiled several new additions to their expanding catalog of games, with one of the most interesting of these being a brand new modern take on the classic Pong tables. The Atari Mini Pong Jr., as it’s called, is meant to be a home console version of the larger Pong games seen throughout many different FECs and arcade centers.

This new project comes as a result of the ongoing collaboration between Atari and UNIS, with the former being the current owner of the Pong franchise, and the latter as the aforementioned leading manufacturer of modern electromechanical Pong tables. This new Pong Jr. comes as a callback to the old Pong consoles that were popular during the mid to late 70s, which were the ones you hooked up directly to your TV and got to playing. In many cases, the controls were hard-wired to the console, and even the sounds came from a built-in speaker instead of through the TV. Clearly, the 70s and 80s were wild times for gaming. 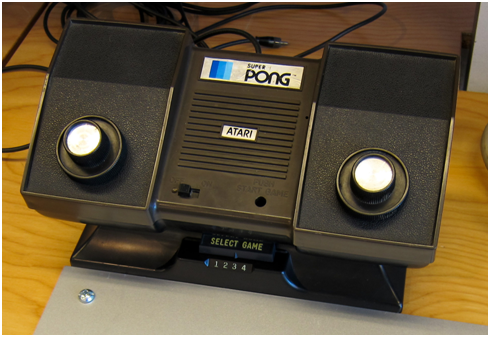 The new Atari Mini Pong Jr. will consist of a miniature version of those arcade Pong tables, only instead of being a standard cabinet or table, it will be a compact miniature version of them, even featuring battery slots for playing on the go. The console itself consists of a small box with a built-in 7.9” LCD screen, as well as a pair of dials—one on each side—that the players will use to control their paddles. The game is meant to be used comfortably in any indoor setting such as your home or office, and will be perfect for passing the time with friends. You can even challenge friends and family to a Pong match to settle disputes in a fun and friendly manner!

In regards to its specs, the Mini Pong Jr. is more than sufficient to enjoy passing the time, either with friends or alone, as it offers the following according to a post on Arcade Heroes’ blog:

Whether you’re at home playing with loved ones, in the office having a good time with your colleagues, or simply on a trip where entertainment will be in short supply, the Atari Mini Pong Jr. will be the perfect addition to pass the time having fun with a timeless classic.