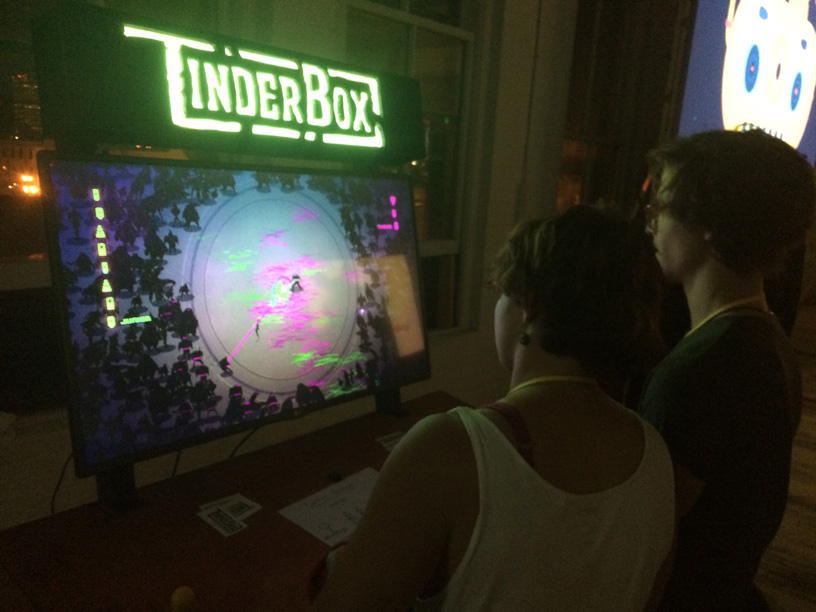 In the arcade industry the traditional model of a standard arcade game room is that of a large room filled wall-to-wall with the latest, greatest and the best of the classic arcade titles. Lately some innovative entertainment establishments are breaking this mold and incorporating arcade machines, new and used, in creative ways:

One interesting example of the integration of arcade games into a business is Greenpoint’s Sunshine Laundromat where the folks running it have turned the arcade games, what are usually time-killing side attractions at a typical laundromat, into the main attraction. Peter Rose, the owner, decided to remove more washers and dryers to be replaced by more pinball machines and other arcade games because these machines were attracting a lot of business.
As Gothamist.com reports, this is a laundry night like no other:

As your delicates spin to cleanliness (washers go for $2.75 for double loads or $7.50 for 50 pound machines; dryers are 5 minutes per quarter), you can try your luck at one of machines which all cost 75 cents, have a beer ($7 from one of eight taps or $5-$7 from a can), or grab a Roberta’s frozen pizza ($10, for either margherita or kale) in order to pass the time.
The beer is served in modified Anthora cups and enjoyed on tables that Rose designed with his mother—they feature mosaics of dogs playing pinball, drinking beer and eating pizza, a tribute to Rose’s dogs that hang out in the front laundromat area.
The games range in age from a vintage 1980s Black Knight 2000 machine to a new machine based on Tron, with the majority of them being from what Rose called pinball’s “golden age” of the 1990s. One machine, Bing Bang Bar, is one of only four in the world available to the public according to Rose. (Read full Gothamist.com article)

A Portland, OR coffee shop is the first to showcase the new Tinderbox, an innovative new gaming machine that allows experimental indie games by new game designers to bring their games to the streets for players to try out. This is a really interesting development among gaming machines because most new indie games that are made free to see what kind of interaction they get with gamers are introduced on certain websites which allow the players to play in the comfort of their own homes. But now they can play from wherever a Tinderbox is set up. Eurogamer.net offers more:

“The notion is more to get your game out there and played in arcade form,” Meade (Tinderbox creator) says. “People are playing Duck Game on the internet against other people, which isn’t nearly as fun as playing Duck Game on an arcade and bumping into each other. That’s what’s different about it.”

Meanwhile, the business hosting the cabinet would make money from keeping patrons in tow. The more they play TinderBox, the more they stick around ordering refreshments.

Still in development, Tinderbox will be able to host a list of free indie games wherever it is set up. It will be interesting to see whether or not this arcade machine catches on in the future. The indie-arcade game development community will be critical in the success of the Tinderbox. The next big arcade hit may actually spring-forth from this experimental arcade gaming outlet.

A concept that has shown success in Seattle’s neighborhood bars is the inclusion of classic, hard-to-find pinball titles and staging pinball tournaments for guests. John John’s Game Room, which is on Capitol Hill and has been recently remodeled, is attracting a lot of attention for how it has been set up. With arcade games, pinball machines, and electronic art, this game room has maintained its unique allure for gamers who appreciate the gaming focused style of the place. It has always been a big attraction due to the focus it places on arcade games, and it will continue to be well into the future, especially when NFL Tickets are one of the top prizes awarded, as Capitol Hill times reports:

As a pinball league member himself, Rogers has enjoyed hosting tournaments at John John’s over the past three months. During football season, Rogers said, “We gave away Seahawks home tickets for almost every home game we could. It’s a $5 entry to a tournament — all the money from the entries goes 100 percent to the prize pool to the tournament for the players, not to the bar. Catch is you could only win tickets once a season, so they got distributed out pretty widely.

The Seattle, Washington pinball scene has more in store at Add-A-Ball, which has the biggest weekly pinball tournament in the world. The turnout is usually around 60 players. You have to be good to play in this tournament. The enthusiasm in the room when the tournament is on is electric. The rules and the appeal are simple, as explained in the SeatleWeekly.com, on the first-hand pinball tournament experience:

We show up to Add-A-Ball … registration begins at 8. The bar gets fuller, and I get drunker, until the tournament starts an hour later.

Pinball tournaments are head-to-head. You’re paired against opponents with the same amount of losses, on random machines, and try not to lose three times—like pinball itself.

[After 4 Rounds of Pinball]
“Are you drunk?” says my opponent. “I am drunk. You have to hit peak drunkenness to excel at this game. If I am sober, I am bad. One beer, I am better. Two beers, I am great. After that, I get really bad, really fast. You know what it’s like? It’s like bowling.”

You can read more of the exciting beer-fueled night here. If you are into pinball, these lively tournaments might just be worth a trip to Seattle.

Arcade Game Room at the Brewery

Craft Breweries are one of the hottest new business start-ups in the country. The Brewers Association reports double digit growth,percentage-wise, in the craft beer industry since 2013. Despite the competition, Lincoln Brewing Company, a Brewery in Fuquay-Varina, NC is integrating arcade games into their new tap house to compete in the growing marketplace. Once again, we find that beer and arcade games are a classic pairing and many bars and breweries around the world are finding that this is one part of the business that is quintessential to their formula for success.
Richard Camos, owner of Lincoln Brewing explained his vision to NewObserver.com:

The taphouse tables are suitable for dates or family meals, plus there are leather couches, a fully stocked bar and a full kitchen. In the back is a room with pool tables, air hockey and arcade games.

Camos also is putting in outdoor seating and expanding the parking lot.

In other words, he has gone all-in betting that people will want to try his beer in a town with both new and well-known competitors.

“People drive out,” he said. “It’s a destination, not like a pizza place where you’re working with a five-mile radius.

Creating a destination that customers will drive long distances to enjoy benefits greatly from the arcade games, pool tables and air hockey tables mentioned. These interactive arcade machines ensure guests will play for hours, compete and enjoy several rounds of the 24 craft beers on tap at the Lincoln Brewery Tap house. A smart choice for a brewery.

Creative entrepreneurs will continue to innovate and add value to their locations by including new and used classic arcade machines in their game rooms. PrimeTime Amusements has over 20 years of arcade game room operations experience, call us today at +1.305.770.4263, we are happy to help add the most successful arcade titles to your location.