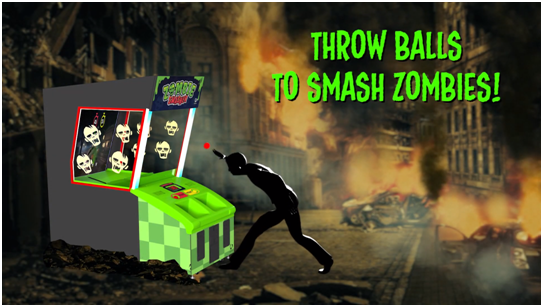 As we’ve mentioned in the past, the COVID pandemic hasn’t done any favors to anyone, slowing down industries, closing down businesses, and wreaking all sorts of havoc. That said, with the world approaching a year since this all began and vaccines continuing to roll out, many companies are finally starting to get back on the proverbial horse, looking to push out new titles that surviving locations can add to their repertoire.

Raw Thrills is one of those companies pushing hard to get products out the door, including their newest game, “King Kong of Skull Island VR”, which we’ve been mentioning a few times in this blog already. However, aside from their first adventure into VR with the ol’ giant gorilla, Bandai Namco Amusements Europe has also revealed a teaser for a new upcoming game, this time developed by Adrenaline Amusements, called “Zombie Smasher”.

This was an odd announcement, considering BNAE went ahead and released the first teaser trailer while Adrenaline hasn’t still revealed any details on the upcoming title. However, from what we can see, Zombie Smasher will use the same cabinet as another one of their existing titles, Blox Breaker, which suggests that the former might, at some point, become available as an upgrade kit alongside a standalone cabinet.

Specifics aside, and judging from the trailer, it seems like this upcoming title is going to be a bit on the simple side of things, consisting of tossing balls at the hordes of encroaching zombies that creep up to the screen. The cool part is that, depending on the direction and strength of the throw, the trajectories of the virtual balls that continue into the game after impacting the screen will change.

The game will support up to two players and will feature bonus events and probably lots of other features when it finally releases. Sadly, however, the details, including the release date, are all unknown, particularly since the game still hasn’t been formally announced by the developers. Regardless, what we do know for certain is that Zombie Smasher will be one heck of a workout!