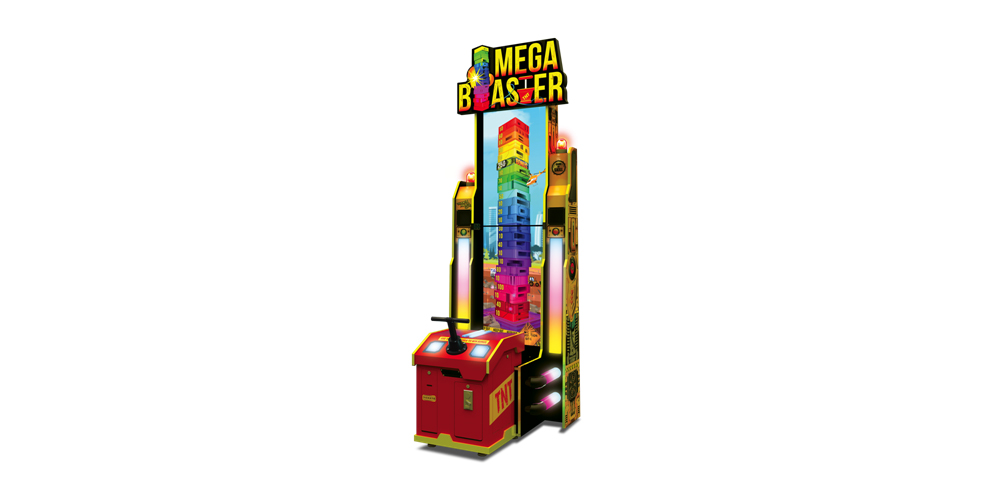 Today, we’re taking a break from talking about the (awesome) games by Arcade1Up, which have become kind of a mainstay in our blog, to focus on something that is of interest for FEC operators out there. We’re talking about Touch Magix’s upcoming videmption game, Mega Blaster, a game that’s been in the works for a while. It is currently on location test overseas in India and is debuting this week at the IAAPA 2021 tradeshow event.

Mega Blaster is quite simple in concept, as is the standard with most videmption games. The game itself consists of a very simple skill-based challenge where the players need to apply just enough force to make an indicator land on an exact spot of a gauge, without overshooting or falling short. And the closer they land on the spot, the more tickets they will receive. Only in this case, the “gauge” is a stack of blocks arranged in a Jenga-esque style, and the object that players will use for applying force is a faux TNT plunger.

It’s fair to think about Mega Blaster as one of those King of Hammer games where you need to bash a button really hard to make the gauge fly up, and the player receives tickets based on how high they can reach. Only in this case, Mega Blaster is more about control and precision rather than sheer strength. Furthermore, instead of using lights to fill out a gauge when the player hits the panel, this game has two large vertical 4K screens to display all the action, which is very rare to see in a game like this, or in a videmption game, period. In this sense, despite its short playtime of around 30 seconds per user, on average, players will be treated to a visual feast as they see the blocks explode and crumble down after using the plunger.

Here’s a product description from the developers themselves:

“Mega Blaster is a new game title from TouchMagix, launching soon at IAAPA 2021. Have a blast on this action-packed game of skill!

Mega Blaster is yet another addition to our  line of ‘easy to understand, hard to master’ arcade games, designed for high repeat value and higher entertainment value. In a test of skills, players must use the right force on the TNT plunger to successfully demolish a tower!

The initial test results for the game are out, and Mega Blaster has managed to yield great income and a high ranking during our initial test runs. It earned upto 45% higher income in comparison to established game titles in the category of quick play redemption that have largely been in the top 5-10 ranked titles across the globe in the past.”

If what they say is to be taken at face value, then it’ll be worth it to keep an eye out for this game once they begin to ship. If you’re interested in learning more, then check out our product page on the game, which features many details about the game and it’s gameplay; We’ll also be posting a video of the game in action from IAAPA 2021, so stay tuned to our YouTube channel for that.

Terminator 2 is Coming Back Thanks To Arcade1Up’s Newest Release