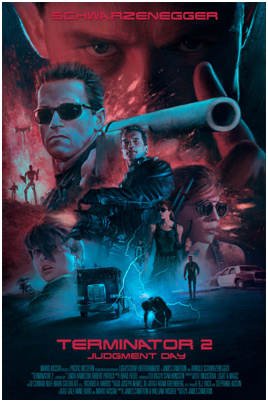 Earlier last week, Arcade1Up revealed the latest games that they are adding to their growing home arcade catalog, headlining the announcement with Midway’s Terminator 2: Judgment Day. This is an old light gun shooter game from 1991, now in a smaller cabinet, and with a much more affordable price tag, as is the case with all the games released by the company.

To the movie buffs out there, Terminator 2 is considered by many to be one of the greatest sequel films, not just in its genre, but of all time, full stop. The way it bridges the events of the original, including Sarah Connor and Kyle Reese’s hopeless battle against the futuristic T-800 cyborg sent from the future by the evil Skynet, which ended with the latter destroyed, and with our heroine bearing the one who would eventually become the leader of the human resistance and Skynet’s downfall, and then shifts the plot to the young John Connor in his teens and a reprogrammed T-800 that rescue Sarah, who is believed to be insane after the events of the first movie and is committed to a mental asylum, and take the fight once again back to the machines.

In this sense, not only does the sequel flow perfectly from the original, but the addition of the now-reformed T-800 and its blossoming father-son relationship with John added a new dimension to the characters, and all of this was wrapped neatly with Robert Patrick’s T-1000, a superior killing machine who could shapeshift into any person it came into contact with, and that was sent from the future by Skynet in another vain attempt to quell the human rebellion in the past, before it was even formed.

All of this is to say that the movie is great, and if you haven’t watched it already, first off, what are you doing? Get out there and watch it—it’s on Netflix for crying out loud—and secondly, as it happens with many films that release and become blockbusters, they often can’t be contained in a single medium, and thus Terminator 2 games started popping up, including the widely acclaimed Terminator 2: Judgment Day arcade cabinet. 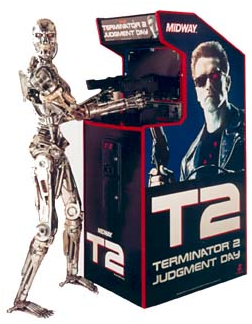 The game itself follows the events of the movie, with the player taking up his light gun and taking control of the reprogrammed T-800 as they fight their way through a war-torn future Earth to destroy Skynet once and for all. However, upon reaching the computer mastermind’s lair and destroying it, they find that the machines have already sent the dreadful T-1000 to the past to kill the younger John Connor and prevent the human resistance from ever existing. Upon realizing this, the resistance sends the T-800 back to the past to protect the young hero and safeguard his coming as the hero of humanity, after which the game follows the events of the movie, albeit abridged quite a bit.

Considering that its gameplay is quite simple and on par with other light gun shooters out there, we think it’s safe to say that most of the game’s success comes from its connection to the movie. After all, it’s a pretty faithful adaptation and includes some of the most pivotal fights and scenes of the film. And besides, who wouldn’t want to play as the unstoppable killing machine that is the T-800? But we digress.

Terminator 2 is Arcade1Up’s latest addition to their catalogue of miniature arcade cabinets, consisting of the same old game many of us grew up with, but at a smaller scale. The game comes in a “home arcade form factor”, includes two guns with full feedback, and a riser that matches the theme of the side panels and marquee, for the taller gamers out there. It also has Wi-Fi support for uploading scores to the leaderboards online. And for the movie enthusiasts, this cabinet will also come with behind the scenes footage of the 30-year-old film’s development. 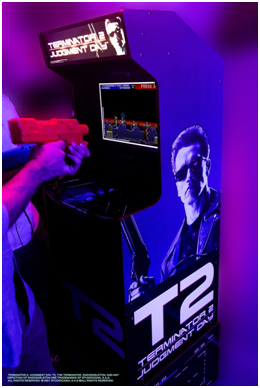 As is the case with many Arcade1Up games, Terminator 2: Judgment Day comes at a relatively affordable price, this time costing $699.99 for the cabinet. This does put it at a higher level than various other 1up machines, but it does have some unique light-guns and licensing both the film and the game is always going to be a little on the pricey side. The pre-orders are already open on the game’s website, but you need to be quick as these often run out of stock in no time.