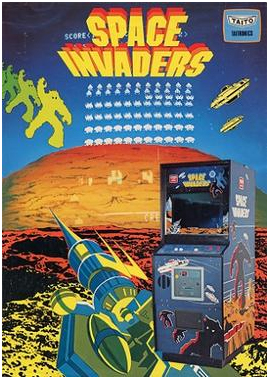 For those who don’t know Space Invaders is one of the biggest arcade games to ever grace the platform (if that is news, where have you been?). Developed by Taito and released in 1978, Space Invaders was a prime example of video game goodness, providing a revolutionary contribution to the evolution of the game industry. Games like Space Invaders turned video gaming from a novelty into a global industry; it was one of the principle titles responsible for the launching the “Golden Era Of Video Games” in the late 70’s and early 80’s. During this time, the industry rose in value from a couple of million bucks to a whopping $12 billion at its peak in 1982.

Speaking of success, in the four years after its launch, Space Invaders made over $2 billion worldwide, which is equivalent to $7.5 billion adjusted for inflation, with a net profit of $1.69 billion. This made it the bestselling and highest-grossing video game product of its time, the latter beating out a certain puck-faced hero.

Suffice it to say, Space Invaders has served as an inspiration to a myriad games, and has been re-released on multiple platforms across many generations of consoles, which serve as a living testament to the impact that the game had back then, and that it still has today!

Which brings us to our next topic, and the point of this article. June 19th marks the day in which Space Invaders turned 40 years old. It has been four decades since the game that had veritably breathed new life into the arcade industry years past, and which essentially put Taito on the radar when it came to arcade games, had been released. This doesn’t mean that this was the only game Taito worked on. Far from it, actually. It’s just that no other games that the company released had the impact that Space Invaders had, and with good reason!

Few games are as successful as Space Invaders was back then, and even fewer are as copied as much as Space Invaders is. And we’re not only talking about official games taking elements from it, and giving it a spin; we’re also talking about cheap copies and bootleg imitations that saw widespread proliferation (which, in the future, would contribute greatly towards the video game crash), elevating the sales of Atari consoles to the millions of units, and attracting gamers to arcades by droves.

An interesting fact about this game is that, when it first came out, Space Invaders was allegedly the greatest contributor of the 100-yen coin shortage in Japan in 1978, which turned out to be no more than an urban myth. Still, the fact that this rumor became viral at the time just helps to elaborate on the popularity that the game had garnered back then.

Taito is not as famous nowadays but is still present to celebrate their most popular game’s 40th birthday, which they did in Japan with an absolutely fantastic projection of the game at the top of Tokyo’s Roppongi Hills tower. The projection, which is part of an ongoing Space Invaders exhibition, is a massive 7 meters (22 ft.) high and 15 meters (49 ft.) wide and could accommodate up to 10 players gaming in a cooperative fashion to stop the timeless aliens from invading the earth. The Roppongi Hills building is an interesting choice to host the celebration since it also houses the aforementioned Space Invaders exhibition commemorating the occasion.

In this special weekend, fans and supporters can go to the exhibition, where they can acquire all sorts of merchandise, and partake of the activities that have been set up. However, those who really want to party with Space Invaders might want to head out to the Laguna Ten Bosch resort in Gamagori, which is just a short trip from Tokyo. All of the aforementioned merchandise and festivities will also be held at the resort, alongside their own version of giant Space Invaders, which can also accommodate up to 10 simultaneous players for some awesome moments of chaotic fun.

For more information on this awesome initiative, feel free to visit the Roppongi Hill’s website (Japanese).