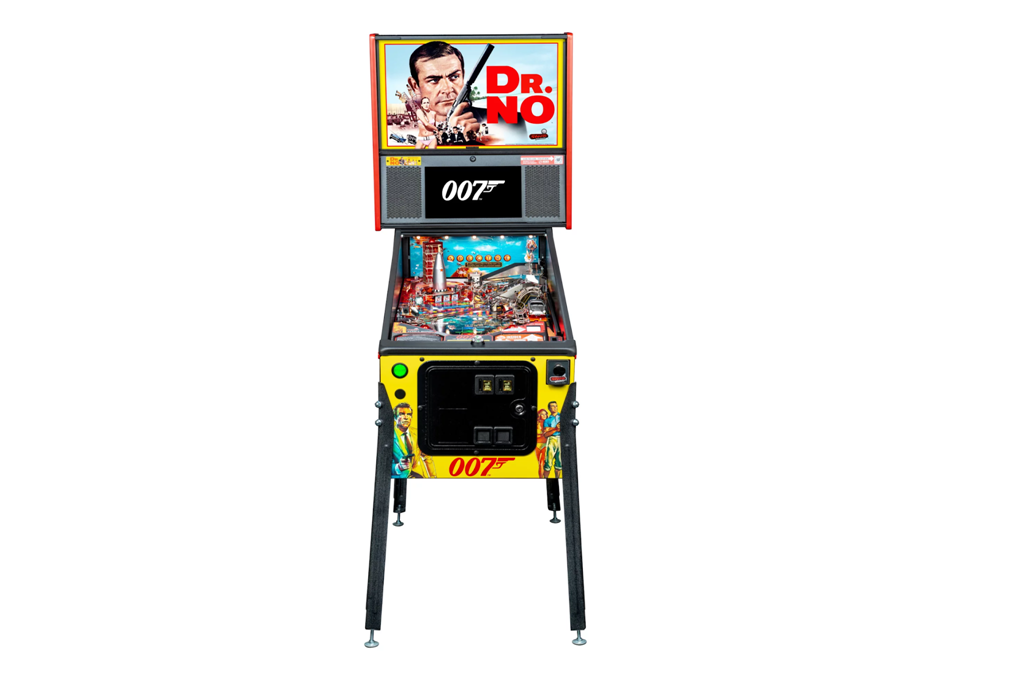 You know whenever there’s a new announcement by the folks at Stern Pinball, it’s always going to be something awesome, and today is no exception as the Chicago-based premium pinball machine manufacturer just unveiled their newest game, this time centered around the world’s most popular spy, James Bond. Only instead of a License to Kill, this machine has a License to Entertain!

The new machine, simply called “James Bond 007”, is based on the original James Bond, portrayed by Sir Sean Connery back in the early ‘60s. And with a throwback as meaningful as this, you just know they wouldn’t spare any expenses or cut corners when building this machine, which is definitely the case.

Unlike most pinball machines that we’ve covered in this blog, which come in two or three versions, James Bond 007 comes in four: The Pro Edition; the Premium Edition; the Limited Edition, and the 60th Anniversary Limited Edition. And while the final version has yet to be revealed, the three others already have a very compelling offer:

As you’d expect, the Pro Edition is essentially the base experience, offering a solid pinball experience with a field inspired by Connery’s many Bond films, including Dr. No, From Russia With Love, Goldfinger, Thunderball, You Only Live Twice, and Diamonds are Forever. The field itself has many ramps and setpieces that directly reference scenes from the movies, particularly when it comes to the artworks. Moreover, the many events in this game will have Bond completing assignments, gathering with iconic allies, and bringing the fight to SPECTRE’s turf, as the world-renowned super spy is always wont to do.

The Premium version, on the other hand, features a different artwork stylized mainly after the film “You Only Live Twice”, and also includes a figurine of a jetpack-wearing Bond; a ramp that leads to the ball lock, accessed from behind the rocket base, and an underwater area with an additional Bond figurine. These are just a handful of the most notable features included in the Premium Edition; the actual full features are probably too many to list here, though you can check them out for yourself in the James Bond 007 Feature Matrix that the folks at Stern have shared.

As we mentioned at the beginning of this article, there is also a fourth version, the 60th Anniversary Limited Edition, though that one has yet to be revealed. And as far as the pricing is concerned, James Bond 007 goes from an MSRP of $6,999 for the Pro Edition, to $12,999 for the Limited Edition. Meanwhile, the Premium Edition is retailing at $9,699. Check out our own official listings for each model, if you want to learn more about this awesome new pinball machine by Stern Pinball – Pro Edition / Premium Edition.