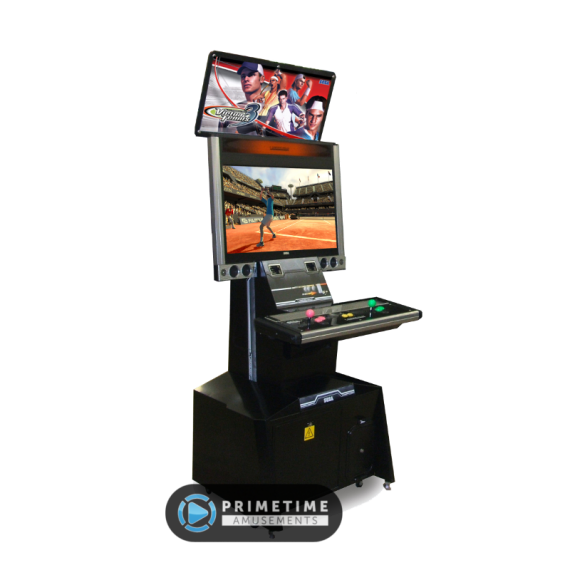 Battle to become the next World Champion as the fun, addicting, award-winning sports series continues with Virtua Tennis 3 by Sega Amusements.

With ultra-realistic graphics and precise player control, gamers will hit the court and play as or against elite tennis from around the time of release, including Federer, Sharapova, Roddick, Nadal, and Williams. Novice players can learn the ropes thanks to practice and training sessions, helping them more quickly become experts. A new multiplayer mode allows up to four friends to battle it out on 23 famous courts around the world. You can even change the play surface as an option! As they serve up their best in a mix of exhibitions, tournaments and competitions, players will rise through the ranks and battle for the top spot!

– A realistic virtual depiction of tennis as only arcades can provide!

– Easy to use joystick/button controls

– 1-2 players can enjoy either single or doubles play

– Produced in 2 models: 29″ upright and a 62″ Super Deluxe, both come with HD LCD monitors

– Ships with a standard coin mechanism

– Sega’s Virtua Tennis 3 is no longer in production, having been released in 2006. Please call us about availability. All used models pass through PrimeTime Amusement’s “Certified Pre-Owned” program, which guarantees that the game will be completely refurbished and ready to operate upon arrival. Also ask about our game rentals!

Check out Virtua Tennis 3 in action: