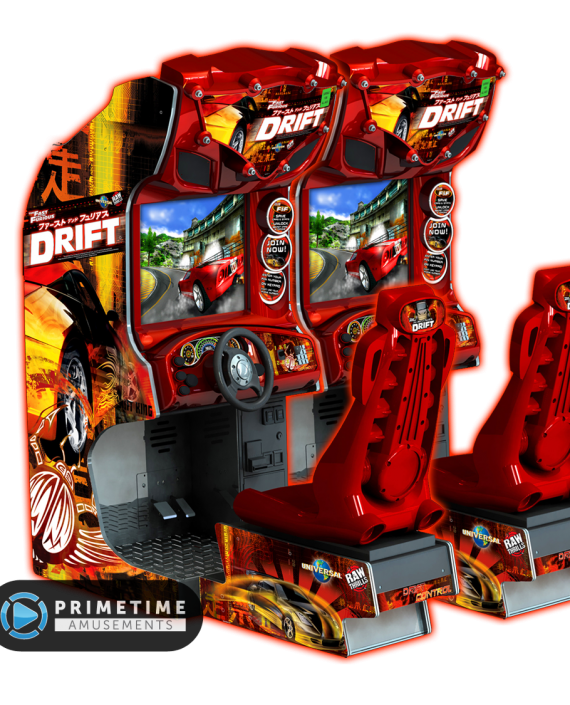 The Fast and the Furious DRIFT (Twin)

PLEASE CALL FOR PRICE (No Longer In Production)

DRIFT features twelve fully licensed and exotic super cars along with seven new Japanese tracks in addition to the twelve original tracks from the first game. The core gameplay remains the same as you race from point-to-point on an open circuit course but now the tracks incentivize the ability to power slide/drift around the turns. This is all offered in a striking new cabinet that stands out in any arcade.

A new addition to the series is the ability to upgrade your car by adding credits to mod the ride even faster. For an additional credit on the upgrades screen, players get two or more upgrades to trick out their ride (# of upgrades are operator adjustable). The players can still save and view their cars and upgrades by using the integrated keypad and the PIN.

This listing is for a TWIN model (two units ship together). It is the same as the single driver, you just link them together as a pair. The game is capable of linking eight units together total.

Raw Thrills’ The Fast and The Furious DRIFT Twin Features:

– Sequel to the popular The Fast And The Furious Arcade Video Game; based on the Drift movie

– Graphics are displayed on a high-rez 27″ CRT monitor (Ask about our conversions to LCD!)

– Link up to eight (8) units for the ultimate multiplayer race!

– The Fast And The Furious DRIFT is no longer produced and is only available as a ‘Certified Pre-Owned’ game. Pricing and availability will vary. All used units are fully refurbished by our expert staff meaning that they will be ready to operate once it arrives at your location. Buy or rent with peace of mind today!

Looking For Other The Fast And The Furious Arcade Titles?