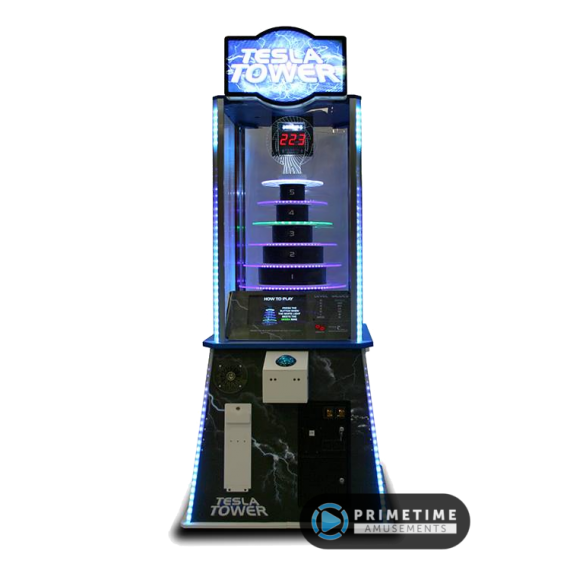 Tesla Tower is a mesmerizing skill stop light game by Benchmark Games, named after the famous inventor Nikola Tesla and one of his inventions.

In Tesla Tower, the game cabinet features six rings that are backlit by full color spectrum LEDs. When the game begins, one ring becomes green while the lighting will move up and down the rings on the tower. Your objective is to stop the light when it lands on the green ring by pushing the button at the right time. As you skillfully land on the green rings, the speed of the game increases as do ticket values thanks to the a progressive bonus feature.

Tesla Tower is a breeze to maintain as it has no motors, solenoids, or mechanical parts!

What Makes The Tesla Tower Special?

– Stop the light on the green rings; multi-colored LEDs make for interesting gameplay

– Single button gameplay is easy for anyone to grasp and enjoy

– Video screen at the base shows animations, score/tickets won and game instructions

– Easy maintenance! No moving parts or mechanisms to worry about

Check out the Tesla Tower in action filmed at Amusement Expo 2017: