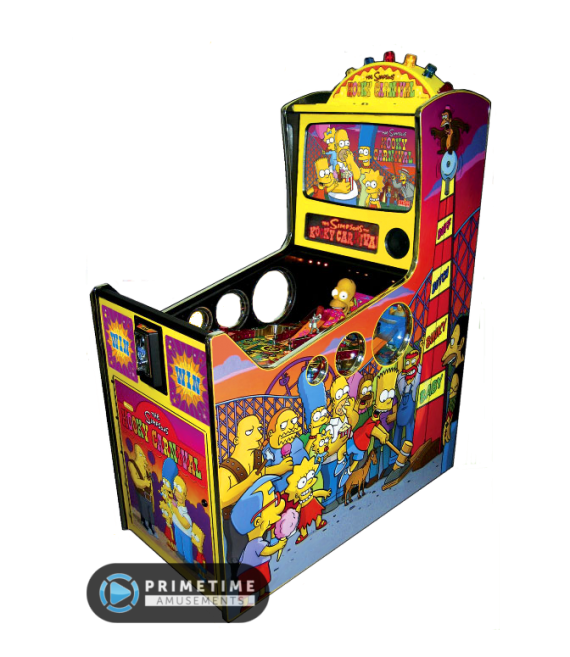 The Simpson’s Kooky Carnival is a colorful, animated, and kooky redemption game created by the minds at Stern Pinball! Starring the most notorious & memorable cartoon family in the world, this is a game that was designed to reward both players and operators alike.

This quick coin redemption game was designed with a small footprint and easy service in mind. Since it was designed by Stern, imagine combining a quick coin game with the exciting electro-mechanical features that you would find on a pinball table! Instead of bashing targets with a silver ball and flippers, you are trying to get the coins through the targets. This includes: a 3-D Homer-Head that holds a coin-accepting donut in his mouth; Bart on a skateboard protecting the entrance to the “Screamatorium”; and the nerdy Comic Book Guy sitting in a dunk tank, taunting the player to dunk him by rolling a coin into his bucket! Each of these toys also feature a letter assigned to them (Spelling out W-I-N). Light the letters and win the Kooky Bonus Award!

The game also features original dialogue performed by the show’s voice actors, using more dialogue than any other redemption game on the market at the time that this was produced. It also includes the world famous Simpsons theme song, bolstered with many authentic carnival sounds.

– Designed by the electro-mechanical wizards at Stern Pinball

– Colorful, art-covered playfield with many inserts making it look like a pinball table

– Light up W-I-N to win the Kooky Bonus (essentially, the super jackpot)

– Stern Pinball’s The Simpsons Kooky Carnival is no longer in production, having been released in 2004. Please call us about availability. All used models pass through PrimeTime Amusement’s “Certified Pre-Owned” program, which guarantees that the game will be completely refurbished and ready to operate upon arrival. Also ask about our game rentals!