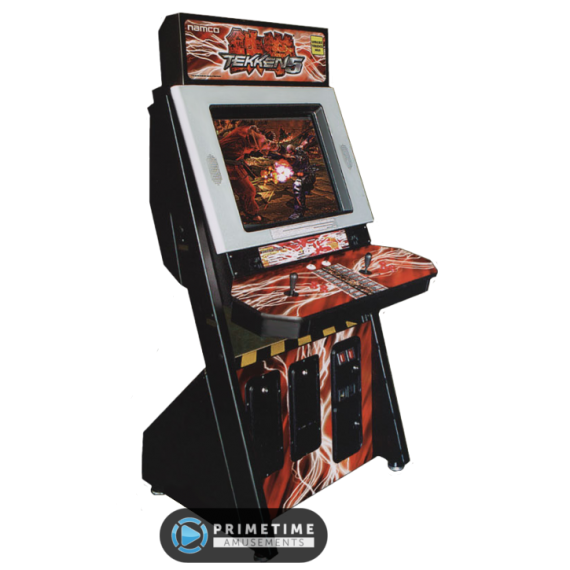 As the fifth in the long running 3D fighter series, Tekken 5 embodies the finest in video arcade technology of its day by bringing both game play and innovation up a notch.

The story to Tekken 5 follows immediately after the events in Tekken 4, following some of the family drama of characters like Jin Kazama. The game play is said to “bring the series back to its roots” with a faster fighting system that results in more exciting matches while also bringing back some fan favorite characters. This also includes some of Tekken’s signature “infinite stages” that have no wall to be backed up against. With a total roster of 32 characters (for machines that have been formatted, seveal characters are timed unlocks), excellent graphics for the time (2004) and innovations such as an IC Card system with ghost player battles and PS2 controller ports, Tekken 5 is a must-have fighting game!

– 32 characters to choose from and 16 stages to battle on

– Standard joystick + button controls with 4 buttons to use per player

– Features a distinctive cabinet design and a 29″ high resolution CRT monitor. Ask about upgrading to LCD!

– Graphics powered by Namco’s System 256, a PS2-based platform that performs 33% better than the home hardware

– This originally shipped with an IC card dispenser and reader. This system allowed players to save their progress and battle against ‘ghosts’ of other recorded players. Tekken 5 IC cards are no longer produced

– Namco also produced an update in 2006 that added more characters (up to 36) and more stages (up to 35). Known as Dark Resurrection, this update is the definitive version of the game! Ask about availability.

– Namco’s Tekken 5 & Tekken 5 Dark Resurrection are no longer produced, having been released in 2004 & 2006 respectively. Please call us about availability. All used models pass through PrimeTime Amusement’s “Certified Pre-Owned” program, which guarantees that the game will be completely refurbished and ready to operate upon arrival.