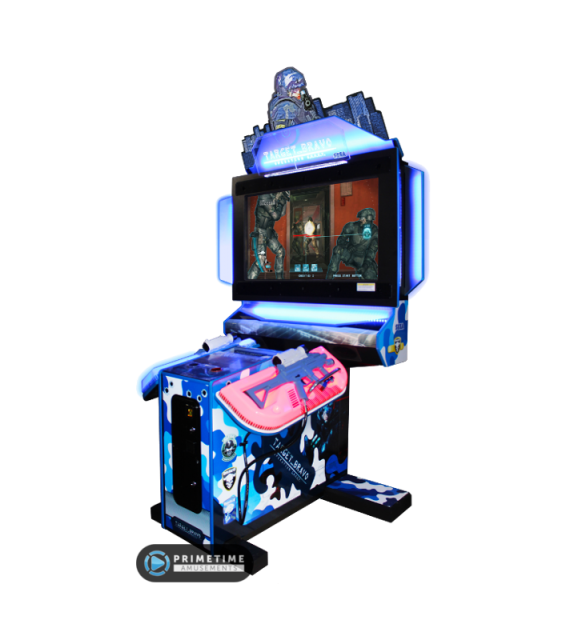 The G.H.O.S.T. squad is back in action with Target Bravo: Operation Ghost by Sega Amusements! This upgrade to Sega’s Operation G.H.O.S.T. (2011) puts players in the shoes of highly trained special force agents. They must use precision shooting and quick reflexes to complete the mission whilst using some of the brand new tools at their disposal. This upright cabinet offers a more affordable and compact alternative to the 55” LED” Theatre edition of the same name. It offers the same software, detailed guns, and LED radar system so players are not missing out on a single piece of the action!

Story Mode – Take the fight to the terrorists in an enhanced version of Operation GHOST’s original story mode. Players will face various special ops situations and over-the-top boss battles as they restore peace and order to the public. As well as introducing new weapons, gadgets and equipment, Target Bravo: Operation Ghost allows players to start at any stage of the game, thereby encouraging them to come back and play their favorite stages again and again!

Check this game out from its first public appearance, IAAPA 2016

Time Attack Mode – NEW mode introduced just for this release! If players select this mode, they are presented with 15 different game scenarios with a goal attached to each (defeat a certain number of enemies or survive the 60 sec time period, etc). Complete the goal to continue through the mode without having to insert more credits to continue. This mode is best played with two players as the game tracks the results of each to compare at the end of the round.

– Exclusive to arcades with no console or mobile release on the horizon
– Part of the famous GHOST Squad franchise that Sega began in 2004
– Major upgrade in both hardware and software to the Operation G.H.O.S.T. release of 2011
– 1-2 players
– Upright cabinet is great for street locations or arcades already near-full on games
– Control the action with the deluxe two-handed rifles. Includes force feedback, a speaker in the gun, action trigger and a fire rate switch (auto or burst)
– Issue Real-Time Tactical Orders (RTOs) to your squad to achieve victory and more points!
– Available in TWO monitor sizes: 43″ OR 55″ LED HD screen (please specify which you are looking for when ordering
– Unique LED enemy radar feature around the monitor shows you where you are aiming and where enemies are located
– Powered by Sega’s PC-based RingWide hardware
– Story Mode now allows players to start from level that they wish
– New Time Attack Mode with 15 different special Ops missions for 1-2 players
– Multiple In-Game Achievements add replay value to the experience
– Also available in an environmental theater cabinet
– Coin or card swipe compatible