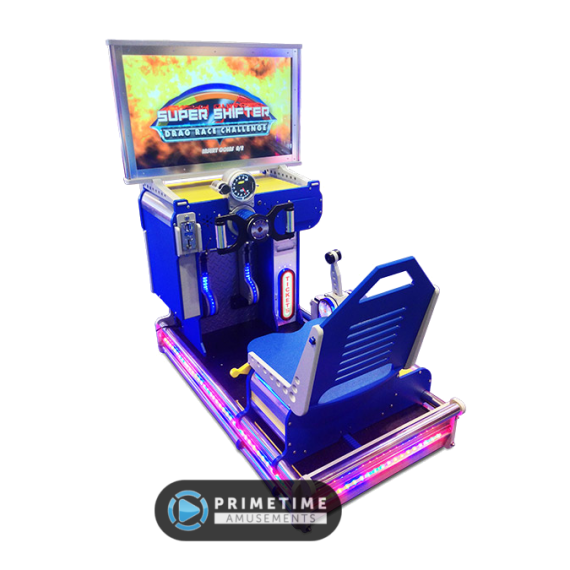 Super Shifter Drag Race Challenge is a milestone among titles by Benchmark Games, marking the first time that they have developed their own video arcade game.

Super Shifter is a modern-day video arcade game version of the wildly popular mechanical arcade driver “Super Shifter” from the ’70’s. Super Shifter was developed entirely in the USA by Benchmark – And they even took their team out to the local drag racing track to record the awesome drag-racing sounds. Control a drag racing hot rod as you try and cover the set distance in the quickest time possible.

Super Shifter was sold as a single seat game, but two games can be linked for true head to head competition.

– Attractive LED lighting under the seat and on the foot rests

– Working tachometer on the dashboard!

– Benchmarks’s Super Shifter Drag Race Challenge is no longer produced, having been released in extremely limited quantities in 2013. Please call us about availability. All used models pass through PrimeTime Amusement’s “Certified Pre-Owned” program, which guarantees that the game will be completely refurbished and ready to operate upon arrival.