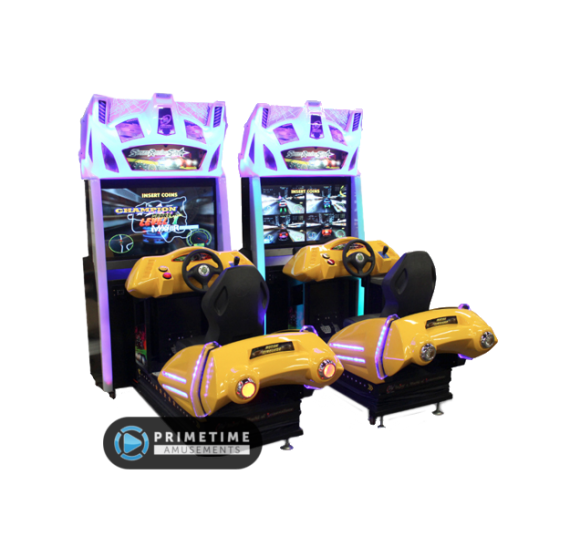 Based on a popular PC game of the same name, upgrade your racing experience with a motion base in Street Racing Stars by InJoy Motion.

Hot cars and hotter girls, roaring turbo engines, smoke from underneath of sporting tires, custom paintwork and aerodynamic body kits, wheel-spin starts and reckless speeds – that encompasses the thrill of playing Street Racing Stars. It’s the world of underground street racing brought to the arcade where there’s no danger of life, limb or jail time. Select your ride and soup it up to your liking then take to the streets in a bid to cross the finish line first. Each track takes place at night and the simulator experience is further enhanced using InJoy’s specially designed motion base system. Feel each bump and turn of your car on the streets in this intense simulator game!

Street Racing Stars has been produced in several models.

Please call in regards to current pricing and availability for each style; operators can link up to four units on any model. Models can be purchased in packages of 2 or 4, which will also include a specific marquee for the number of games being used.

“MDX” models refer to Motion Deluxe units that use a traditional electric motors/metal arms to generate the motion effect. This provides 6 degrees of motion on a 2-axis base. These also have larger game screens, more detailed cabinet work with molded pieces and a single steering wheel. The MDX-4 model is pictured here: 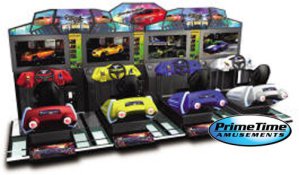 “SDX” refers to Super Deluxe Models. These are similar to the MDX units except that they added a second steering wheel to the control panel and take up more space for play. During the game, control switches between the right and left players every 30 seconds, making for an exciting multiplayer race each time. Here is the SDX-2 model: 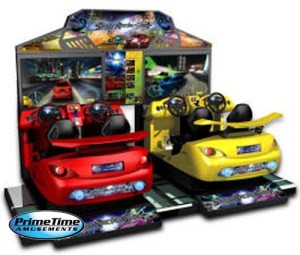 “AIR” refers to the newest design that replaces the expensive electrical motors with an innovative air bladder system. This means that the game is less expensive to produce and easier to maintain while still producing realistic motion effects. The AIR system uses a 3-axis system instead of 2 and is also capable of providing up/down seat motion which mimics bumps. These also use a new cabinet design that features striking translucent RGB LED back lit side fixtures and marquee.

AIR Units are likely to be easier to obtain than the others but give us a call and we can figure out what you need!

– Based on the PC racing game of the same name

– Produced in several models as delineated above

– 18 selectable and recognized sports cars to choose from

– Graphics displayed on a 42″ HD screen

Check out the AIR model of Street Racing Stars in action from IAAPA 2012:

Here is the SDX Model: