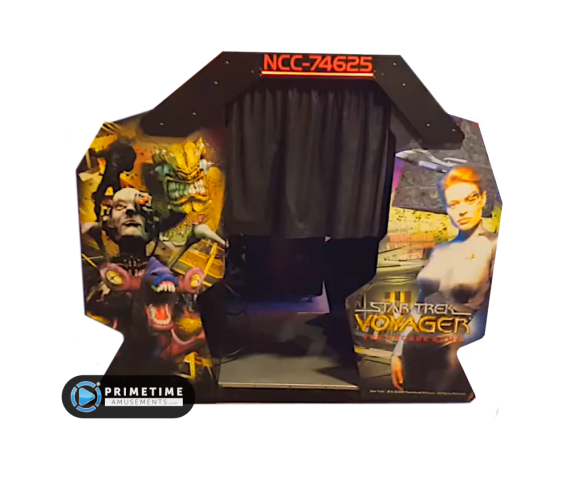 Join the intrepid crew of the USS Voyager under the command of Captain Kathrine Janeway in the arcade exclusive Star Trek Voyager, by Game Refuge & Team Play Inc.

Star Trek Voyager presents a unique arcade take on the popular TV show of the same name, placing the players on the far side of the galaxy as they encounter threats like the Borg and other alien races of the Delta Quadrant, including the Hirogen and Species 8472. Armed with standard phaser weapon, blast the enemies that appear while grabbing upgrades and fighting to save the crew so they can continue on their journey home to the Alpha Quadrant. This game also includes space battle sequences that are unique for a light-gun game, where players get to pilot the Delta Flyer from the show, battling a variety of space ships.

The game was released in three models – a 29″ standard upright; a 39″ Deluxe upright and a massive 39″ environmental deluxe that included bench seating.

REFURBISHED STOCK: 6/17/21! – A Star Trek Voyager environmental deluxe unit is currently available from a PrimeTime operated location in Florida. Each will go through our Certified Pre-Owned refurbishing program before shipping to you. Please call for pricing and lead time.

– Features 3D likenesses of the TV characters, as well as voice overs done by the same actors

– Uses the classic shoot off-screen to reload (“remodulate your phaser,” as the game says) mechanic

– Produced in 3 models: 29″ standard; 39″ deluxe; 39″ enviornmental deluxe. The environmental original came with drapes on the side entries, but those may not be present in the available used model.

– Player stats shown after each level is completed, including accuracy, secrets uncovered and a variety of bonuses

– This game is no longer be available new, having been released in 2002. All used games that we sell carry our “Certified Pre-Owned” seal of approval which means that we will carefully and professionally refurbish the game to reach like-new standards. This ensures that you are receiving a top quality game with every purchase!