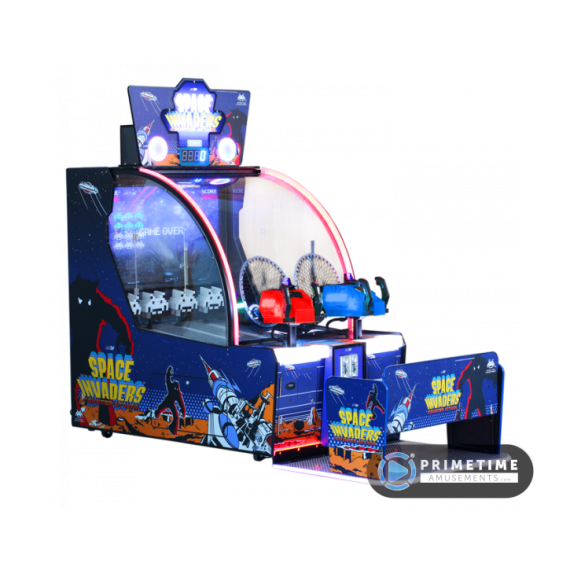 Earth is in danger and only your trusty ball blaster and skill stands in the way of preventing disaster in Space Invaders Counter Attack by Taito and UNIS.

Space Invaders Counter Attack is the latest arcade entry in the popular Space Invaders series that was started by Taito back in 1978. Taking a page from Space Invaders Frenzy, this game features slightly similar gameplay to Taito’s other recent Space Invaders game, Space Invaders Frenzy. Hordes of invaders descend towards the ground and tanks below, and the player has a mounted cannon at their disposal. Instead of the shots all being virtual, you now control a real ball launcher! Softballs hit the screen (behind a protective barrier) in fast succession, really laying it to the invaders.

But while most arcade games with ball launchers have that feature as just a gimmick, there is another dimension to this game that elevates the use of such technology to really set this game apart from other Space Invaders games – real targets! If/when the invaders on the game screen reach the ground, they “transform” into real, physical targets within the game chamber between the cannons and the screen. Lighting up with LEDs, these Invaders continue the march towards the player – if they reach you, then it’s game over! Hit them with the balls to push them back. If you successfully eliminate these invaders, you will move on to the next round. This makes Space Invaders Counter Attack unique among the many Invaders games out there and a sure-fire hit for arcades!

Witness the invasion of Space Invaders Counter Attack from it’s debut at IAAPA Expo 2019. Video available in 4K UHD; subscribe to us on YouTube to stay up-to-date with the latest product videos!

– An iconic franchise that started in arcades, keeps the idea home while adding new innovations

– Self-contained ball chamber keeps the balls from bouncing out; balls are recycled back into the guns

– 43″ HD screen contains the virtual action, where you must eliminate the Invaders as they march towards Earth.

– Shoot power-ups to turn the tide of battle in your favor!