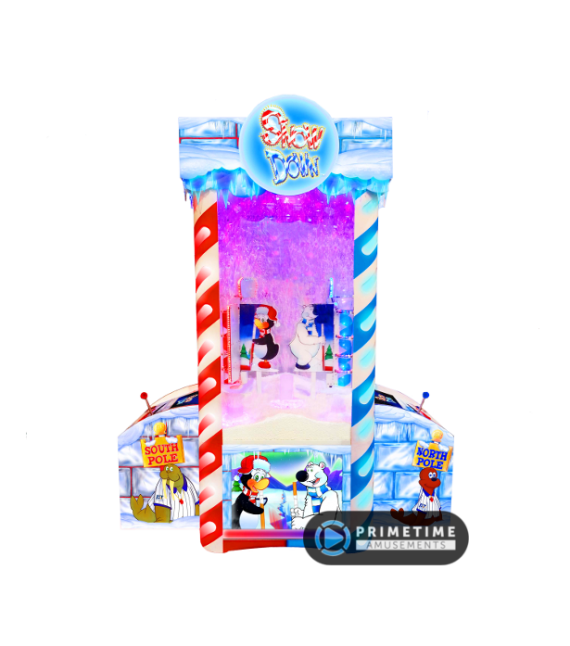 CLICK HERE TO DOWNLOAD/VIEW THE SNOW DOWN MANUAL [PDF]

It’s North Vs. South as poles ‘battle it out’ in Snow Down, a unique redemption game developed by Jennison Entertainment Technologies.

The goal behind Snow Down is simple – inside of the central chamber contains a “blizzard” of fake snow and a colored tube for each player. In taking control of the tube, players are challenged to fill their buckets with more snow than their opponent before the timer runs out. The more snow you’ve collected, the more tickets that you win! Each tube has five levels, each with different values of tickets that can be won. Completely fill your tube up and win the bonus!

To add to the excitement as well as the interactivity behind the game, players can do more than just move the tubes around – there is strategy involved as well. Each player console has a “SNOW DOWN” and a “BLIZZARD” button. When a player pushers the BLIZZARD button, all the fans on their side turn and blow the snow around the game chamber at a rapid pace – which fills their tube faster. A “SNOW DOWN” button is also available where the player can push that button and drop the snow in the opponent’s tube. As players only have limited use of these features during game play, they want to plan on when to incorporate them.

Each Snow Down cabinet is an impressive arcade cabinet piece, using around 3000 vibrant multi-color LEDs to highlight the Winter theme.

– Large and attractive game cabinet with inviting characters on the artwork

– Tiny styrofoam balls represent the snow; comes with the game

– Various blowers for keeping the ‘snow’ in motion

–  Operator Adjustable Settings to customize the game to your liking.