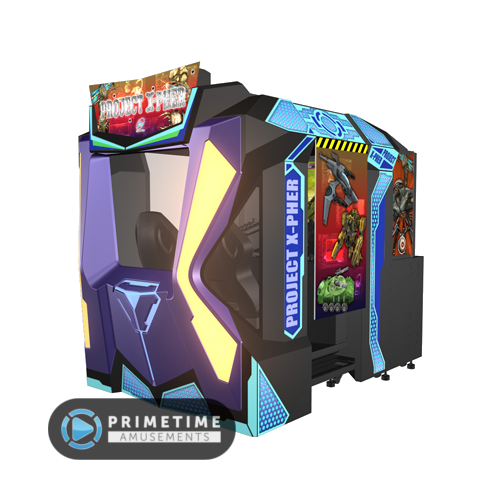 Project X-Pher is a science fiction based light-gun shooter by InJoy Motion that pits you against hordes of alien invaders who have come to steal valuable resources on Earth – particularly a new energy source known as “X-Pher”.

Take control of your trusty cannon and fight back against the invaders in this exciting and arcade exclusive sci-fi shooter.  Built around co-op play, the game does support single player but is more satisfying when played with a friend. Battle the aliens through wastelands on Earth, eventually taking the fight into outer space. A variety of creatures will try and stop you from obtaining your objective with monstrous boss battles awaiting you along the way over twelve levels of action.

All of this is enhanced by InJoy Motion’s Deluxe Theater cabinet. Enclosing the players within an unmistakable sci-fi cabinet, the players sit upon a motion base that mimics the on-screen action. The mounted cannons also use InJoy’s signature dual force feedback to provide an experience that you won’t find anywhere else but the arcade!

– Note that Project X-Pher was originally released in 2011. Availability in 2017 may be limited.