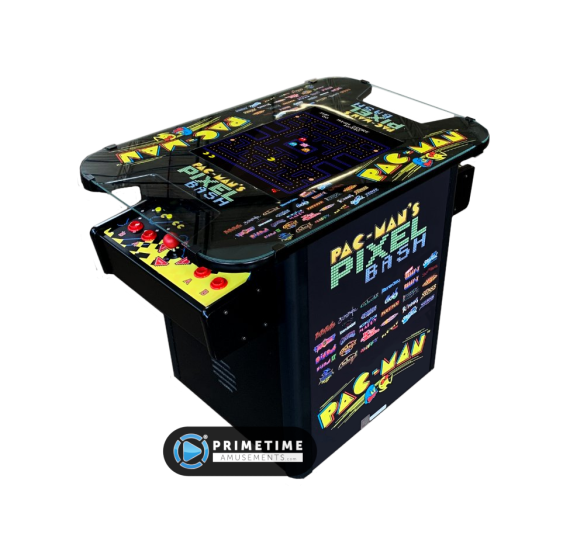 If you grew up at the arcade then you likely have fond memories of playing games like Pac-Man, Galaga, Dig Dug and others that are now considered to be “classics”. Now you can bring those great titles back to your game room and in their proper arcade forms thanks to Bandai Namco’s Pac-Man’s Pixel Bash! This listing is for the coin-operated commercial model.

As a “cocktail model,” this product mimics the classic cocktail cabinets of old. Also available in a non-coin configuration, you can get it in wood grain or black cabinet styles. It features the same software as the Pixel Bash Upright, which includes 31 incredible retro games from the ’80s in one sleek package. These are the original arcade software designs – no hacks, knock-offs, inferior console versions or the like. The cabinet features authentic arcade controls and a sharp LCD monitor. Each game was originally designed by Namco, meaning that everything here is official and licensed. Thus you can buy with confidence  – this isn’t some hodge podge creation thrown together in a garage or overseas piracy firm.

What Classics Are On Pac-Man’s Pixel Bash Cocktail Edition?

Here is the complete list of titles you will find on the Pixel Bash cabinet. As of this writing, Namco does NOT offer any updates to add additional software to it.

*Note that Ms. Pac-Man is on the platform as a 32nd game, but it ONLY appears in the menu if the game is set to free play. It is not available in coin-op mode.

What Other Features Does Pac-Man’s Pixel Bash Cocktail Model Include?

– The classic cocktail table design was originally created for restaurants – it still works for them today!

– Play from either side of the cabinet; the screen flips in two player mode to accommodate the current player

– Available in a black or wood grain cabinet (please specify which upon purchase!)

– Also available in an Upright model

Buy the Pac-Man’s Pixel Bash cocktail model from us with confidence! We’re a reliable seller that has been around for more than two decades so we know this business. You can also check out a variety of other official Pac-Man games including: