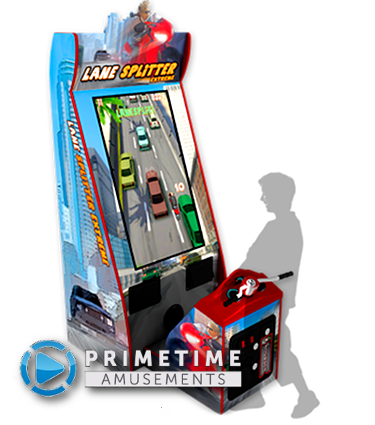 Weave in and out of traffic in this great motorcycle racing game by Adrenaline Amusements. No other racing game on the market is quite like it.

Another app-to-arcade port, this version of Lane Splitter goes “Extreme” by adding a large vertical screen and realistic motorcycle handlebars to the game. This allows the player to have more driving precision than on the mobile title.

Check out Lane Splitter Extreme in action from IAAPA 2012

The game formula is similar to that of the popular “endless runner” genre that dominates mobile devices. Instead of running, you are riding a motorbike so you have to take care to avoid the other cars (and the occasional careless driver) on the road.  Collect coins as you drive for points or tickets (operator adjustable). Crash and it’s all over! Do you have the skill to reach Top Speed?

– Three (3) levels of difficulty for the player to choose from

– Boost button for that burst of turbo speed

– Adrenaline’s Airline Pilots is no longer produced, having been released in 2012. Please call us about availability. All used models pass through PrimeTime Amusement’s “Certified Pre-Owned” program, which guarantees that the game will be completely refurbished and ready to operate upon arrival.