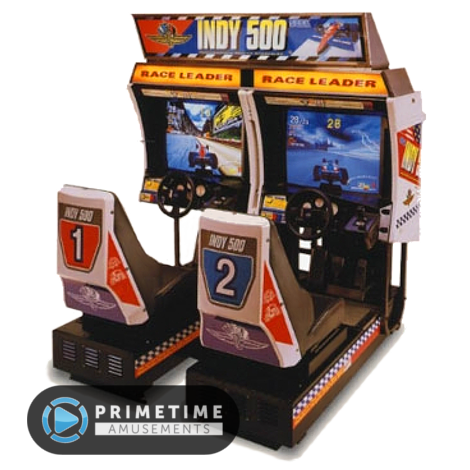 Indy 500 by Sega is the evolution of their Virtua Racing arcade game, combining elements from that and Daytona USA to make for an amazing simulator racing title.

Players choose from three different courses: Indianapolis 500, Highland and Bay Side. The game offers automatic or manual transmission with six different gears. There are four types of views (one of them being a ‘secret’ view) selectable with the two VR buttons. Use the slip stream principal to pass other cars successfully and take home the trophy!

Indy 500 was released in three model types: Single Standard; Twin Model and Deluxe 8-player which featured realistic, full sized Indy 500 cars that players would sit in. Please ask about which version is available.

– Exclusive to arcades with no home port ever completed and released

– Three tracks to choose from, one based on the real-world Indy 500 course from the mid-90s, two others are fictional.

– Take advantage of realistic physics including drafting but watch out for tire wear! Use the pit to fix that damage.

– Sega’s Indy 500 is no longer in production, having been released in 1995. Please call us about availability. All used models pass through PrimeTime Amusement’s “Certified Pre-Owned” program, which guarantees that the game will be completely refurbished and ready to operate upon arrival. Also ask about our game rentals!