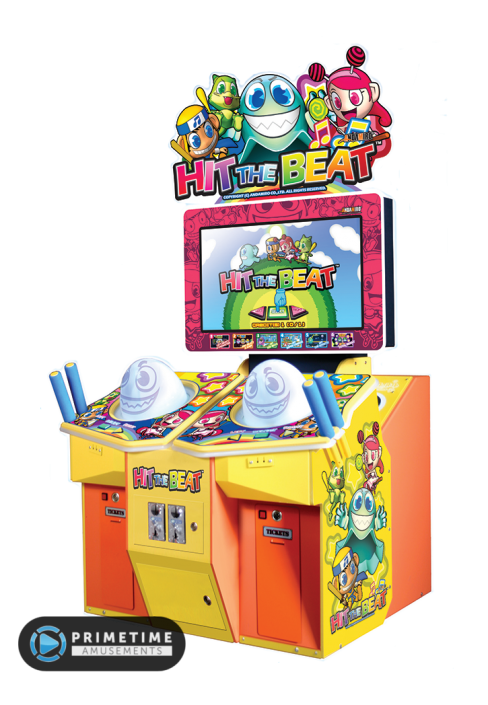 CLICK HERE TO DOWNLOAD/VIEW THE HIT THE BEAT BROCHURE (JPG)

Do you see a lot of younger players at your venue? Offer them something a little different but a lot of fun with Hit The Beat by Andamiro.

Hit The Beat is a drum-style rhythm game that features bright & colorful graphics with a premise that is easy to approach, Unlike other drumming games, the player is not presented with drum-pads – instead there is a multi-color lit dome with a cartoon enemy drawn on it. Hit any part of the dome to coincide with the approaching notes and your character on screen will slash them away. Also instead of standard drumsticks, either of the players uses a set of sponge sticks to dish out the beats. Complete the song for the boss battle at the end of the level!

– Each player has a pair of sponge drumsticks

– Attractive graphics are displayed on a 32″ HD display; sounds pumped through an 8″ subwoofer

Video Shows an unreleased version of this game that used the SpongeBob Squarepants license. The final release is simply called Hit The Beat and does not use the Spongebob characters or artwork.