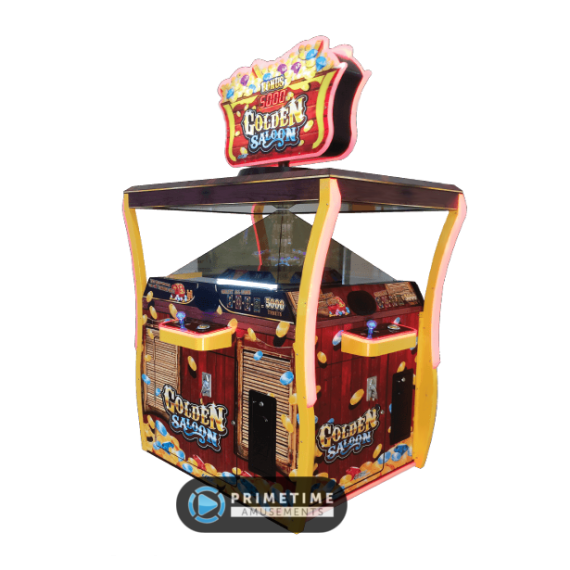 Combining a virtual coin pusher game with fantastic technology, Universal Space’s Golden Saloon is sure to be a draw for FECs and other redemption game centers alike.

Using a ‘pseudo-hologram’ display (semi-transparent plastic that reflects the projection above), players will be dazzled by the effect that allows them to only see their screen while seeing the person on the other side! The pyramid shaped screen also means that Golden Saloon can accommodate up to four players at the same time, each side of the game featuring a 2-way joystick and a button.

The game itself works as a blend between a coin pusher and a quick coin shooter. Players purchase coin shots that they use to try and knock the virtual prizes off of the rotating tower. The tower has the same prizes for all players so be careful – depending on how often you have hit a prize, that might make is easier for an opponent to knock it off for tickets instead! If all of the prizes are knocked off of the shelf, then the shelf will disappear to reveal another shelf until no more are left and players fire coins at the prize loaded treasure chest instead! Collect virtual prizes and cards to win tickets, with a player who wins four cards on the same station walking away with the fantastic 5000 ticket bonus!

– Coin or card swipe compatible. Please specify what is needed when you order.