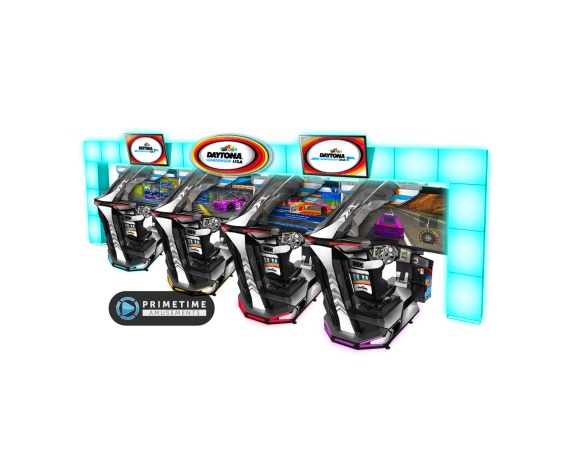 Among legends of arcade lore, few games can match the excitement, the thrills and the earnings that Daytona USA brought to the scene back in 1994. Now, Sega is tapping into this incredible series with Daytona Championship USA. This listing is for the Motion Super Deluxe model (SDLX) that was released in early 2019.

Check out the deluxe Sega’s Daytona Championship USA from this manufacturer produced video.

Daytona Championship USA was also designed for tournament play and multiplayer in mind. All units feature a cascade of operator adjustments that makes this game customizable to your location & situation. Thanks to the new “Live” marquee with “Party Mode”, you can advertise upcoming tournaments, operate player brackets and showcase prizes!

SDLX models provide the ultimate Daytona racing experience. Users sit inside of a cockpit that has been enhanced from the other arcade models. Experience g-forces from the pivot motion system and enjoy a more realistic dashboard. Ships with four linked models and the large overhead marquee that sports two monitors.

– Improved handling over previous iterations of the software