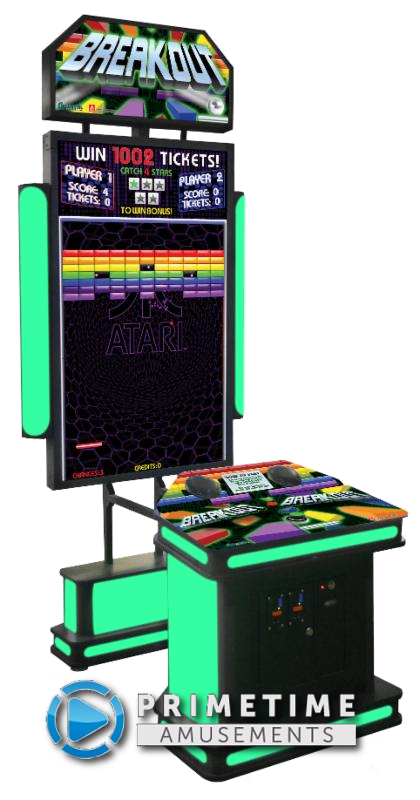 In 1976, Atari created a variation of their Pong concept that would set the video game world on fire, launching off ten years of what would be called the “Golden Age of Gaming”. The easy to learn, difficult to master formula of using the paddle to smash bricks with a ball showed the potential that video games had to provide captivating and unique entertainment to the masses

Forty years later, Breakout is back in the arcade with a new cabinet, an updated game formula and you can win tickets! The software is based on the 2011 iOS release Breakout Boost, with modifications to support 2 player co-op, arcade spinner controllers and ticket payouts. This is all housed in Coastal Amusements’ attractive new 65″ screen cabinet design, which has also been used for other videmption titles like Frog Around and Subway Surfers.

See Breakout in action here, from the IAAPA 2016 trade show

Fun Fact: Apple founders Steve Jobs and Steve Wozniak both worked on the original Breakout design before creating their Apple I computer design. Read more about the history here.

– New sequel to a historic and fun arcade game, Breakout

– Clear the screen of bricks within the time limit using the paddle and the ball. More points = more tickets

– Choose from 99 levels with different brick patterns to clear

– Catch the stars to win the Ticket Jackpot Bonus!

– Bright and colorful cabinet is lit with RGB LED lighting

– Ticket Dispensers Included. This game does NOT have a video-only/no tickets amusement mode

– Coastal’s Breakout is no longer in production, having been released in 2016. Please call us about availability. All used models pass through PrimeTime Amusement’s “Certified Pre-Owned” program, which guarantees that the game will be completely refurbished and ready to operate upon arrival