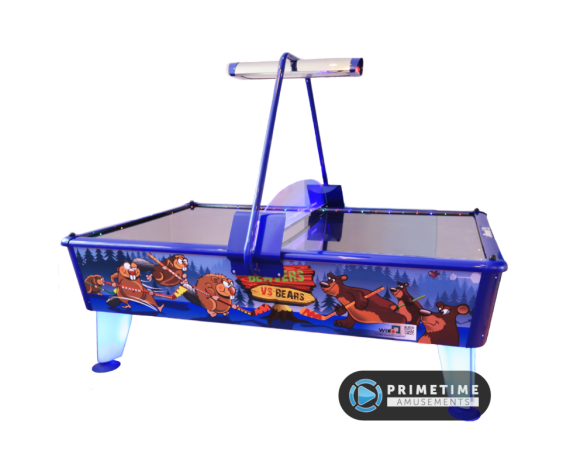 If some beavers hold an air hockey battle with bears in the forest, will it draw a crowd? Maybe not a forest, but at your arcade with Wik’s Beavers Vs. Bears air hockey table, it definitely will!

Beavers Vs. Bears adds some character to a classic game design. The sides of the table feature fun cartoon artwork of beavers facing off against bears, so players will want to play as their favorite animal. Then, it is a wide table designed to handle up to four players at once (2v2). The design builds on years of experience that Wik has under their belt, resulting in solid reliability and earnings for a location.

The table itself is built to last, using a perforated stainless steel playing surface. It comes with an overhead score bar, allowing each player or team to see their current score at any time, and a center shield to help reduce the number of flying pucks.

– Classic arcade excitement for 2 or 4 players

– Made by Wik, who has also produced tables like the Gold, Arctic, Skate and many others.

– Fun characterization that pits two cute forest creatures against the other

– Operators can adjust the settings to their liking

– 260W air blower for a consistent, powerful flow of air